From Steelers.com‘s Bob Labriola this morning:

“In one half of playing time against the Kansas City Chiefs at Heinz Field, Roethlisberger completed 13-of-19 for 166 yards with one touchdown and no interceptions for a passer rating of 113.0. And had Emmanuel Sanders been able to control the ball through the catch on what could have been a 34-yard touchdown, Roethlisberger’s numbers would have been even better. And on that particular play, the ball was perfectly thrown.” 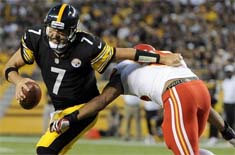 If last season taught anything from the performance and production standpoint, it’s that … well, Ben needs to be Ben. It’s his offense. He’s the star, and this is how he’s most comfortable. He can’t be a couch covered in plastic to avoid the next spill. He can’t be bounded up in a box behind the line, required to release or relent within 2-3 seconds. He’s got to be used in the way he’s most effective, most intimidating.

Don’t underestimate that last point. In all the times I’ve interviewed the Steelers’ opponents on game week, Roethlisberger’s unpredictability dominated the conversation. Even when he was hurt. Even when the team was reduced to that one dimension. They feared the unknown.

Favorite tweets during the game:

NFL on ESPN @ESPNNFL
Ben Roethlisberger is Houdini on a football field. #EscapeArtist


Jeremy Mansfield ‏@I_am_Jman
One thing for certain….@_BigBen7 is a beast. #Steelers #Chiefs


Mary Calabrese ‏@luvsun21
@_BigBen7 Love your smile! It’s great to see your favorite QB love the game so much!


And one from a Chiefs fan:

You can see photos from last night’s game, and one special photo taken by Merril Hoge before the team took the field, here.