Home/News/“Big Ben most likely the happiest camper”
Previous Next 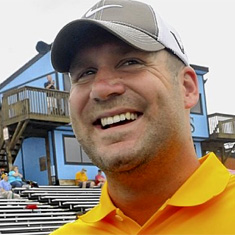 Ken Roethlisberger felt a new kind of pride this weekend when he played host to his son for dinner: it was Ben’s first Father’s Day as a dad, and Ken’s first as a grandparent.

“It’s nice to see [Ben] in that role,” Ken Roethlisberger said Monday while taking in Ben’s Football ProCamp at Seneca Valley High School. “It’s fun to watch him and Benjamin — he’s so small in his arms. He’s doing a good job so far. He gets down on the ground and plays with him — it’s great.”

Former quarterback and current broadcaster Rich Gannon once said that becoming a father made him a better quarterback in that he became “more disciplined.” Since Benjamin Jr. was born in November, Roethlisberger has started to understand the connection.

“I feel like having a child, especially a son, makes you very patient,” Ben said. “It was enjoyable to have my first Father’s Day and be around family — that’s what’s important to me.”

“It was nice having the whole family together,” Ken added. “We went to church in the morning all together. They came to our house and his wife, Ashley, cooked dinner — a cheese pasta with chicken in it. Delicious.”

While players across the league, from Minnesota running back Adrian Peterson to now free-agent linebacker Bart Scott have expressed concerns about letting their sons play football, Roethlisberger –who has absorbed injuries to nearly every part of his body while playing for the Steelers — said as long as Benjamin Jr. wants to play, it’s fine by him.

Ashley and Benjamin Jr. paced the sidelines of the football field Monday while Ben and a slew of coaches mentored about 500 boys and girls at Roethlisberger’s annual two-day camp.

The kids, ages 7 to 14, went through various drills designed to teach proper catching and throwing techniques before scrimmages. A few lucky campers got to catch a pass from Roethlisberger, right knee remained wrapped two weeks removed from arthroscopic surgery.

Unlike past camps, Roethlisberger rode a bike around the complex in order to see more groups.

“It helps me get around faster than walking, and its probably better for my knee doing a little rehabbing while I’m helping the kids,” he said.