Home/News/“Camp of a Lifetime”
Previous Next 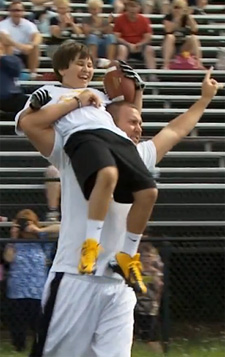 The two-day camp, organized by ProCamps Worldwide and sponsored by Giant Eagle and Fifth Third Bank, was the sixth annual Ben Roethlisberger football camp and the third hosted at Seneca Valley High School.

The whistles of 50 local football coaches blared above the noise of the excited children, whose ages ranged from 7-14. The Raiders’ Stadium was chaotic as the campers, outfitted in their matching white t-shirts, ran between stations to learn different football skills.

Roethlisberger roamed from group to group coaching them one-on-one, hopping on his blue Schwinn bicycle to ride between the two fields.

The players, at one point, sat mesmerized as Steelers head Coach Mike Tomlin gave them a “life lessons” pep talk.

But it wasn’t all work and no play — some campers danced to a DJ’s music, rolled around on the turf or made goofy faces for the news cameras.

Roethlisberger did stop to have some fun of his own.

He pranked campers by spraying them with a water bottle and hiding behind a group of coaches. When the campers caught sight of the quarterback they shouted, “Ben!” and dissolved into giggles.

And a few more reflections on the camp from parents & grandparents: 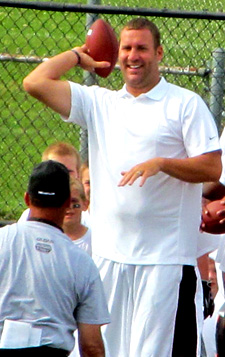 “I would like to express my thanks to Ben for hosting his camp the last 2 days! He made a dream come true for my son (and myself). I would also like to extend a very special thanks to Brenda (Ben’s mom). My son, who’s only 7, was very nervous and too scared to go on the field. Brenda was walking by and noticed us and stopped. She talked to him and then noticed her shoes were the same color as his and they compared shoes. This helped very much to eased his nerves. After that, he had the courage to go out on the field and had a wonderful time both days! Again – thank you Brenda!” — John Fasick


“We brought our grandchildren to Ben’s youth camp for their second year. They had a great time this year,too. Our granddaughter age 13 and our grandson age 8 really enjoy interacting with the other campers and Ben. What fun we all had. They told us to bring them back again next year and we will.” — Linda Hawk, Ohio

“I wish all the hosts would do that! Regardless, we love Patriots player camp each year!” — Patriots fan Samantha Downs, on Ben throwing a pass to each youngster.

“I thought the camp was fantastic and my son Nate had a blast. Things we’re extremely well organizing and all of the coaches did an amazing job. It was fun to see how engaged the coaches were with the kids and made each of them feel like a Super Bowl MVP every time they caught a pass or made a play. I was especially excited to see Ben participating with the kids all day long in every aspect of the camp….from warm-ups to drill to the games. Not to mention that my son can now say that he caught a pass from Ben Roethlisberger. Thanks for a great camp.” — Brian Skripac

“What an awesome birthday gift for Steven. I am CDR Ziegler’s aunt and I thank you for an incredible gesture for his family while he is serving to keep us all safe. Thanks again.” — Marti Moore

“My son loved camp! He had such a great time. Thank you for taking the time to spend with the kids, it was a great success and they all had a great time!” — Joyce Myers

“I looked at the Steelers website today and my son is in the camp photo. He and I were already excited and so pleased with the way the camp went and that made it even better. Proof that the Steelers and Ben are the class of the NFL.” — Britt Beasley

“Two of our foster children had the chance to attend Ben Roethlisberger Football Camp this week and some very special memories were made! We are grateful to all who made this extraordinary opportunity possible!” — Every Child, Inc.


And congratulations to parent Stacey Clark, whose photo below was the winner of the Polaroid Fotobar “Winning Image” contest! You can see more of her photos in Ben’s Camp album! 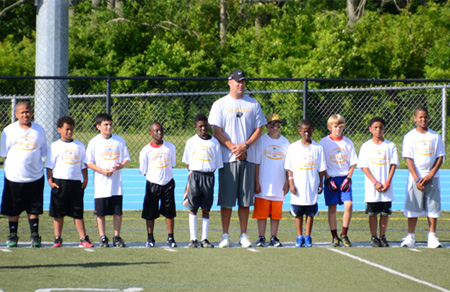 Ben stands with other players in the hopes of getting drafted on Day 1! Now, he was drafted, but apparently it wasn’t until late in the first round – understandable, considering he had a lot of talent around him!