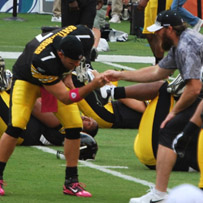 Carolina Quintero and Jennifer Gralak attended Sunday’s game in Miami and sent their photos to share with other fans.

You can see them here.


There have also been a couple of additions to the Lil’ Fans album in the photo gallery, which you can check out here.

Kids can check out Ben’s answers to the “7 questions for #7” in the right-side column on the Biography page here.


*Thank you to everyone for sharing their recent photos!

From an article by senior NFL.com columnist Vic Carucci entitled, “To teammates, Roethlisberger looks bettere than ever”:

Ike Taylor could see it two weeks ago in practice, as Ben Roethlisberger prepared for his first game back from his suspension.

The footwork. The crispness of his delivery. The accuracy of his throws. The quality of the passes being completed against one of the better defense’s in the NFL — and that included those that came at the cornerback’s own expense.

“Ben, man, you look better than I’ve ever seen,” Taylor told him. “Even (better than) in training camp, when everybody was saying you looked good.”

With a “new and improved” Roethlisberger, the Steelers can make a pretty convincing case as the best team in the NFL.

Their defense and running game helped carry them while Dennis Dixon and Charlie Batch filled in at quarterback. Now, they have the passer who can deliver those long, difference-making throws, such as the one that resulted in a 53-yard touchdown to Mike Wallace and the one that produced a 43-yard gain to Hines Ward to set up a field goal.

“He stepped up in the pocket and I was coming open into a zone and he laid it over the top, only where I could get it,” Ward said, marveling as if that hadn’t happened many times before and in bigger games. “He’s the same Ben. Every time we step into the huddle, we feel like we have a chance to win every ballgame. And that’s always been the same.”

After watching Ben Roethlisberger play for the past two weeks, it appears that he has quickly shaken off the rust following a four-game suspension and is performing at a high level.

Roethlisberger has guided his team to two victories, and has directed an offense that was pedestrian in his absence.

In two starts, Roethlisberger has completed nearly 65 percent of his passes with five touchdown passes and only one interception. His 122.4 passer rating would blow the doors off the league leaders if he had enough attempts to qualify.

That sampling of numbers would make him a worthy Most Valuable Player candidate at anytime, however, it has been his impact on the offense as a whole that has him on the radar. Roethlisberger has added a big-play element that had been missing. The Steelers only connected on 12 passes over 20 yards during their first four games, but have completed 14 passes of 20-plus yards since the two-time Super Bowl winner returned.

Ben on the Cover…. 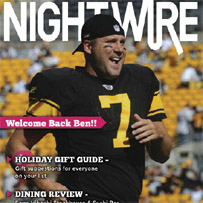 Not only is Ben on the cover of the November issue of Pittsburgh’s “NightWire” magazine, but you can check out a recipe for Big Ben’s Super Nachos on page 4!

The magazine is available on newsstands this week.


You can see the full cover and the recipe here.