January 3rd: “If Ben ever sees this, we did try our best to be there”

Home/News/January 3rd: “If Ben ever sees this, we did try our best to be there”
Previous Next

January 3rd: “If Ben ever sees this, we did try our best to be there”

Taylor and Bailey, Ben DID see it! But let’s give everyone a little background first:

Taylor and Bailey left Oak Island, NC at 7:30am for Heinz Field to see Big Ben & the Steelers play the Browns that evening…but Mother Nature had other plans. They got as far as I-95 in Northern Virginia when ice and snow on the interstate stopped them in their tracks – literally.

From snowflakes to stranded — for 16 hours on Monday, Taylor Mooney and Bailey Ferguson sat just 26 miles north of Richmond on I-95.

“Terrible just terrible. There was three inches of just solid ice covering the entire road. So anytime we attempted to get out of the vehicle you were just sliding everywhere,” Ferguson said.

The destination for the two was Pittsburgh just in time for the Steelers’ kickoff. This duo left Oak Island, North Carolina, by car after two canceled flights determined to be in their seats for Big Ben’s last home game. It was around 1 p.m. when the trip came to a halt.

It wasn’t until about 5 a.m. Tuesday that things got moving and that they finally got off the interstate. 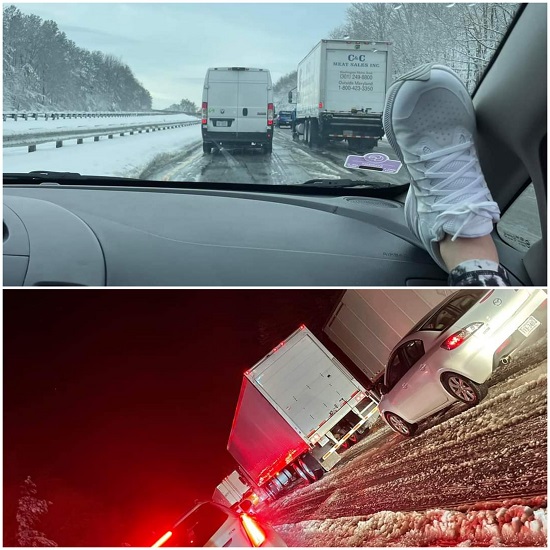 Well I’m sure MANY of you have seen the news about all the horrendous incidents from I-95 over the past 2 days. Well, me and Bailey had the pleasure of getting stuck alongside many others in Virginia. We left Oak Island at 7:30 yesterday morning to head to Pittsburgh for the game last night, due to our flight getting cancelled twice, thankfully we stopped at 11:30 for food and to fill up the tank (unfortunately we didn’t get snacks which we did regret later on). We hit the traffic around 1pm and moved 26 miles in 16 hours, 8 of those hours in which we were in ‘park’ – completely stopped on the interstate.

We might have lost our flights, tickets to the game, our hotel in Pittsburgh, the experience of being at Big Ben’s last possible home game and didn’t even have service to watch the entire game…but our Pittsburgh Steelers pulled through with an amazing win and that was the highlight of our day!!

To Big Ben, I wish I could of been there to watch your possible last home game last night, every Pittsburgh game I’ve ever been to I have worn your jersey (photo below) which has now been to so many games I’ll treasure that forever! Thank you for all your dedication to the team and the game, Pittsburgh won’t be the same without you!

Overall I was up for over 25 hours, in a car for 24 of those, didn’t have anything to eat for 17 hours and once we FINALLY got off an exit every hotel was full so we had to drive an hour back to Richmond to get a hotel and get some sleep around 8am. Thank you to everyone who took the time out to help anyone in need during this time, we had an older man walking around, trying not to fall on ice, handing out water to those who had nothing! Our thoughts go out to everyone else who got trapped alongside of us, hopefully your experience wasn’t any worse than ours! 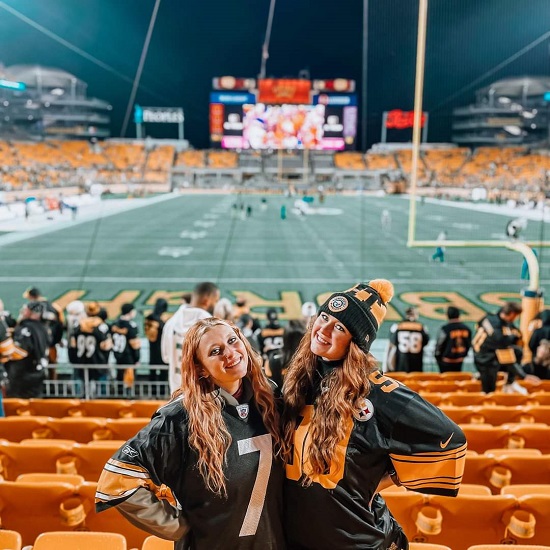 Yes, Ben DID see it. And he immediately set the wheels in motion to first locate contact information for Taylor and Bailey, and then send them some special gifts: A pair of game-used cleats for each, and a set of his game-used gloves –

Taylor was so excited that she filmed herself opening up the box that Ben sent to her!

“I have honestly in my life NEVER been more excited to come home and open any package. Thank you Big Ben for not only [sending] something physical that I can keep and cherish forever, but for all the work you put into the Pittsburgh Steelers throughout your years. I will forever be a Pittsburgh fan.” — Taylor, upon opening her special delivery. 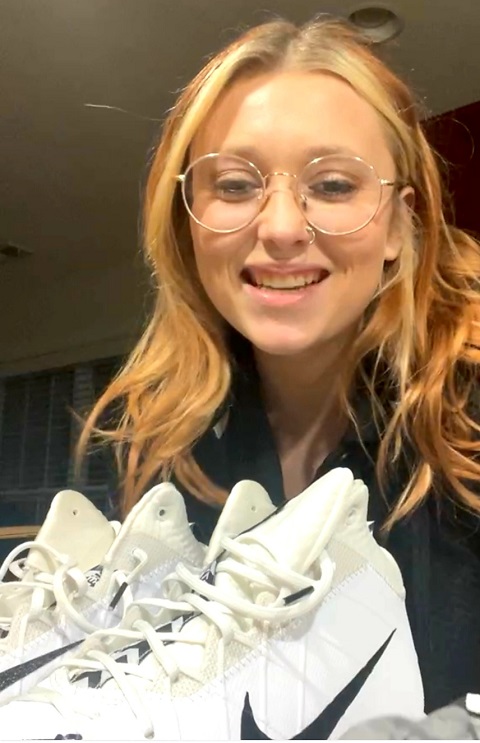 It’s honestly more than I could of ever dreamed of! Even before this I’m in the middle of trying to buy a house and me and my cousin have already been planning my ‘Pittsburgh man cave’ so this is will 100% be the first item in that room! Thank him so much from me!!! Me and my cousin have been huge fans from the beginning, me not even knowing any football terms at the time, buy knew who Big Ben was back then. This is honestly a dream come true. Tell Ben this means more than anything! Especially from his last season! I’ve honestly never been happier! — Taylor Mooney. 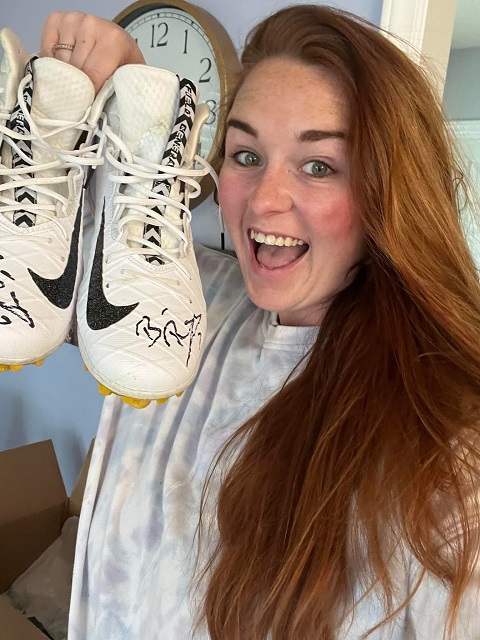 “I am so thankful for the commitment that Ben gave to the city of Pittsburgh for the past 18 seasons. That kind of dedication to a team and city is so rare these days, and the program will be forever changed for it. I was only ever lucky enough to see him once in person, but the memories of watching will be something I cherish forever. And to own just a little piece of his career is the greatest gift I could ask for! I wish him nothing but the best of luck in anything he decides to do next!” — Bailey Ferguson.

Ladies, we’re just glad you both got home safely, and we’re so sorry you missed the game!