Tickets to the event are still available!


“That was the biggest thing for me. It’s an honor to go into the Hall of Fame, but to go in with Coach Hoeppner kind of made me tear up a bit and gave me goose bumps. To me that means more than going in myself. It will be an emotional day.” — Ben, on being inducted with his football coach and friend, Terry Hoeppner. 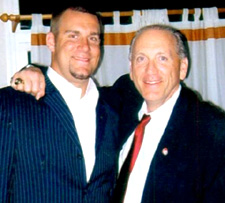 As Miami prepares to honor six outstanding individuals with their induction into the Miami University Athletics Hall of Fame, the date for the event and induction details have been finalized.

Ben was a three-time All-MAC selection, earning first-team honors in 2003 and second-team recognition in 2001 and 2002. A three-year letter winner, he forewent his final season of eligibility to enter the 2004 NFL Draft. Miami retired his jersey No. 7 in 2007.

The six members of the Hall of Fame Class of 2012-13 will be honored during the mens basketball game versus Akron on Saturday, February 9th.

Later that evening, an induction dinner will be held at the Shriver Center Multipurpose Room at 7 p.m. Tickets for the dinner may be purchased by visiting or calling the Miami Athletics Ticket Office at 513-529-4295 or clicking here.

Cost is $30 per person and reservations for the induction dinner must be made by 5 p.m. Friday, February 1st. Space is limited and reservations will be taken on a first-come, first serve basis. No walk up tickets will be available.