Yesterday, Ben announced that his foundation (BRF) at The Giving Back Fund will be making a contribution to the Pittsburgh Bureau of Police in honor of K-9 Rocco who was stabbed and killed in the lined of duty last month. 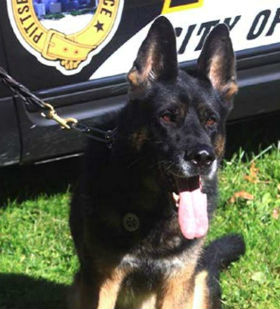 Ben said, “The Ben Roethlisberger Foundation started when a police K-9 was shot and killed where I grew up in Findlay, OH. My family and I were moved by what that dog meant to the police force and learned that similar K-9’s all over the country are helping to keep our communities safe. This last week, a K-9 officer named Rocco was killed in my current hometown of Pittsburgh.

“After talking with Officer Phil Lerza and getting his blessing, the Ben Roethlisberger Foundation would like to announce that we are going to get Officer Lerza a new dog. Rocco can never be replaced, but we only hope to help with the healing process and to provide Officer Lerza with another loyal partner.”

Regina McDonald, Acting Chief of the Pittsburgh Bureau of Police, said, “We appreciate Ben Roethlisberger’s generosity and support. The Bureau will be looking, in the near future, to schedule a K-9 training class, evaluate potential K-9 handlers and purchase dogs. Officer Phil Lerza will be given first consideration for a new dog. His dog will be the one donated by the Ben Roethlisberger Foundation.”

This announcement precedes this week’s expected announcement of nine K-9 grants to the Pittsburgh area as part of the 2013 BRF Grant Cycle. During the 2013-14 NFL season, The Ben Roethlisberger Foundation has been distributing grants to K-9 units of police and fire departments in the cities and surrounding communities of each regular season away game for the Steelers. The Foundation invited police and fire departments across the country to submit proposals detailing their needs.