Home/News/Your child can train alongside #7
Previous Next

…at the SunnyD Ben Roethlisberger ProCamps Football Camp this summer!


“We cannot thank you enough for an awesome experience for our daughter and all of the campers! Big Ben spent the entire day, both days, on the fields with the kids. He provided guidance, was very encouraging, and had fun with them. He threw each child a pass…400 kids in attendance! The team coaches were wonderful too! They provided great great tips, encouragement, and also lots of fun for the kids. Kudos to the staff and organizers of this camp! The camp was very organized and delivered more than we expected! A big THANK YOU to all for an event well done!

Our daughter Chloe won one of the Camper of the Day awards with her little sister Abigail, who was her biggest cheerleader this weekend. Chloe was really nervous before the camp started. She was worried that she would not be able to keep up with the boys who play football on organized teams. However, thanks to Ben, the coaches, and staff she shined during camp, learned a lot and really had a blast!!!” — Lisa & Mike Booth. 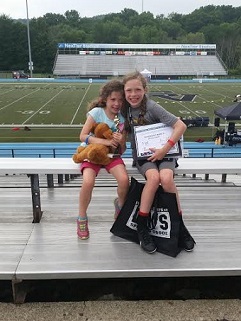 Stop by the ProCamps website today and sign your child up with our special promotional code, BigBen7.

Spots filling up fast, in fact, the Citi Private Pass Lunch with Ben has been sold out for a month!

The Camp is open to boys and girls, grades 1 through 8, and Ben will be joined by a selection of the top prep and college coaches from the area.

Each day, campers will experience various stations, specializing in fundamental skills of football.

Individual groups will be small to assure that each camper gets maximum instruction.

Group rates are available for your team, school, or group of friends! For more information, please contact Alex at aland@procamps.com.

Ben will give daily talks highlighting the finer points of the game of football and beyond, as well as be on the field EVERYWHERE helping coaches and throwing passes. Parents and guests will be able to listen to camp guests in designated areas at each location.

And you never know who will show up to help out #7!

Kids that have attended Ben’s Camp have had the opportunity to meet and get instruction from Bruce Gradkowski, David DeCastro & and Kelvin Beachum, and even Coach Tomlin, who also helped judge the races!

And Ben’s camp is always a family affair!

Ashley & Baylee, Ken & Brenda, sister Carlee, and of course, Lil’ Ben are always there to support #7 and his football campers! 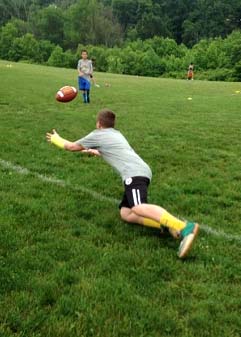 Each camper will receive –

• An autograph from Ben Roethlisberger (item provided – outside items not permitted)

• A camp team photo with Ben

• Opportunity to win contests and prizes


In the event of heavy rain or inclement weather, the camp will be moved to a nearby indoor facility. Camp instruction and other related activities will continue inside the facility.

Parents will be notified of the indoor location in the Camp Bulletin that they receive at check-in on the first day of camp.


“For three years, Brennen and his brother, Carter, have attended Ben’s ProCamps.Brennen broke his arm in the beginning of May, but knew he would be getting out of his long-arm cast and into the short-arm right before it was time to head to camp. He chose a yellow cast and refused to let anyone sign it in the hopes that maybe, just maybe, Ben would.

While Brennen was sitting with his team on the first morning of camp, waiting to break off into their drills, Ben walked past Brennen and asked, ‘How are you going to catch a pass with your arm like that?’, to which Brennen responded, ‘I’ll find a way.’ While Carter’s team was playing football, Carter told Ben that the kid in the cast was his brother and he had a Sharpie in his sock, which made Ben laugh. After Brennen’s team played their football game, Ben approached Brennen and asked, ‘Do you still have that Sharpie in your sock?’. Ben then proceeded to make Brennen’s year – he signed his cast!

Brennen not only caught all passes Ben threw to him, but ran one in for a touchdown. Such a wonderful memory for my boy!” – Joanna Dill.

You can sign your child up for the camp here.

You can read more testimonials from parents and grandparents here & here.

And you can see some great photos from those parents & grandparents here.