Today, Ben announced the final grants of the 2015-16 season from the Ben Roethlisberger Foundation at The Giving Back Fund. The Foundation will be distributing eight grants totaling $93,250 to police departments in the Pittsburgh area.


“At a time when the responsibilities associated with protecting and serving our citizens is becoming greater, and our budgets are becoming smaller, the grant from the Ben Roethlisberger Foundation to the Beaver County Sheriff’s Office is truly a godsend.” — Beaver County Sheriff Tony Guy. 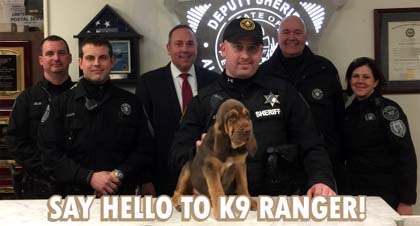 This announcement completes the Ben Roethlisberger Foundation’s ninth grant cycle, during which it distributed more than $170,000 in grants to K-9 units around the country. In addition to the Pittsburgh grants announced, the Foundation distributed grants to K-9 units of police departments in the cities and surrounding communities of each regular season away game for the Steelers. The Foundation invited police and fire departments across the country to submit proposals detailing their needs.

The mission of Ben’s foundation is to support K-9 units of police and fire departments throughout the United States, with a particular emphasis on support for service dogs in Pittsburgh, PA. Ben also supports Make-A-Wish. The Foundation has distributed in excess of $1.5 million since 2007.

Ben and his foundation are grateful for the generous supporters who have enabled them to expand their K-9 grant program, including Apollo Jets, Pro Camps and Allegheny County District Attorney’s Office as well as caring individual donors from around the country.

Garrett K. Kimmell of Elizabeth Borough Police shared, “My lifelong dream has been to be a police K-9 handler. The Ben Roethlisberger Foundation has helped make that dream come true. It would have been very difficult to pursue a K-9 unit without this assistance.”

Shenango Township Police Officer Daniel Tressler said, “The Shenango Township Police Department is extremely grateful to the Ben Roethlisberger Foundation for their very generous grant. This grant will be used to purchase and train a new dual-purpose canine unit to continue the canine program at Shenango Township. We deeply appreciate the grant that the Ben Roethlisberger Foundation has awarded us. Being a smaller department it is often difficult to afford the upfront costs of purchasing and training a new canine unit. This grant will cover those costs and ensure that the canine unit will continue at Shenango Township.” Tressler continued, “Continuing the canine unit will enable our department to combat the ongoing heroin epidemic and better serve our community as a whole. I look forward to the opportunity to train and work with the Shenango Police Department’s newest canine officer.”