Ben: “Tone was a great teammate and a great football player”

Home/News/Ben: “Tone was a great teammate and a great football player”
Previous Next

Ben: “Tone was a great teammate and a great football player” 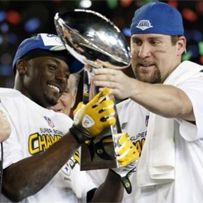 “He knows the game,” Roethlisberger said. “Whether it was playing with me and I was scrambling around trying to find the open areas or the ad-libbing he and I would do, he and I would just know what each other was doing.

“There were times we’d do completely the wrong thing but it’d work for a touchdown. We had pretty good chemistry.”

Ultimately, they would go on to create one of the sports more memorable moments in Super Bowl XLIII, with Roethlisberger finding Holmes in the back of the end zone for a go-ahead touchdown. Holmes would go on to become the sixth WR in NFL history to win the Super Bowl MVP.

“That’s great to remember that,” Roethlisberger said. “And that play will be remembered for a long, long time. Tone was a great teammate and a great football player and he brought a lot to this — to help me every week on Sundays whether as a bailout guy or a guy to throw deep and make plays, really, a special kind of football player and I’m glad he’s doing well up there in New York and obviously he’s missed.”

NFL Network announced this evening that they will do a “LIVE” interview with Ben during halftime of their Thursday Night Football game tomorrow night (San Francisco 49ers vs San Diego Chargers).


*Thank you to Jennifer, Mark and Dylan.

We read about the wonderful things the Steelers do in the community all the time, but this is a story you don’t want to miss!