“I just play to win the game. I’m not one that cares too much about numbers or putting up stats. I just want to win football games and win Championships and that’s all I try and do. I know I’m not the prettiest quarterback when I do it, but at the end of the day, a W is a W to me.” — Ben, from his interview on NFL Network during halftime of Thursday night’s game. You can watch the interview here. 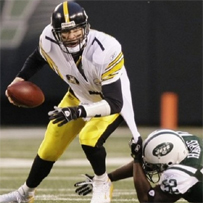 From The Sporting News:

This remains one of the best games of the year because it matches two of the top three teams, record-wise, in the AFC, even though the Jets have lost two in a row to fall two games behind the Patriots in the AFC East. The Steelers have won four in a row to hold a one-game lead in the AFC North and haven’t lost to the Jets (7-0) in Pittsburgh since the 1970 merger.

Based on the production of each offense the past several games, this might not be a high-scoring game, especially with the way each team plays defense. But, despite their lack of touchdowns, the Steelers offense has actually been able to move the ball, averaging 358 yards, 21 first downs and 38 minutes time of possession in the past three games. What’s more, Roethlisberger has thrown just one interception and the offense has committed just three turnovers in the past four games. Like the Jets were doing before their two-game losing streak, the Steelers have been finding ways to win. Prediction: Pittsburgh 20, N.Y. Jets 10.

From the North Jersey Record:

The Steelers are allowing only 2.9 yards per carry, so this might not be the week for the Jets to get their running game back on track. But Pittsburgh’s offense has been struggling recently, with only two touchdowns in the last three games.

Forcing turnovers by the Steelers won’t be easy, as QB Ben Roethlisberger has only five interceptions in nine games and the Steelers have lost only seven fumbles.

From ESPN’s Rich Cimini on the Jets blog:

– The Steelers have 17 interceptions, including a team-best six by S Troy Polamalu. Here’s some perspective: Polamalu almost has as many interceptions as the entire Jets team (seven).

– Their bookend rushers, James Harrison and LaMarr Woodley, will be an enormous challenge for the Jets. They have combined for 18.5 sacks.

– QB Ben Roethlisberger and WR Mike Wallace are a dangerous long-ball tandem. In two seasons, they’ve already hooked up for six touchdowns of 40-plus yards. 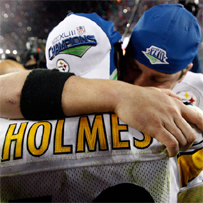 From the New Jersey Star-Ledger:

Two days a week during the offseason, Santonio Holmes and Ben Roethlisberger would get together at the Steelers’ practice facility and play catch.

With no one else around, Holmes said the two would just talk. Put things into perspective. They developed a relationship where a head nod or a hand gesture would be all the communication they’d need come gamd day.

It was a bond that molded itself into one of the more memorable moments in recent NFL history, with Holmes nabbing the go-ahead touchdown from Roethlisberger to win Super Bowl XLIII.

“I had a great relationship with those guys. I’m pretty sure (the fans) will give me a standing ovation once I get on the field. I’m pretty sure you’ll look in the stands and see a lot of No. 10 jerseys with ‘Holmes’ on the back from the Steelers.”


You can watch the Steelers locker room interviews here.

Stat of the Week…

Among players with at least 50 attempts against added pressure, Steelers QB Ben Roethlisberger has the third-best passer rating since 2009. Big Ben is also one of only three quarterbacks, along with Joe Flacco and Peyton Manning, that have not thrown an interception against the secondary blitz over that span.

Quote of the Week…

From Ben’s Q&A with Dale Lolley, on Scout.com:

“I know how to play the game one way. To tell me not to play it that way is a hard thing to do. I can go into any game and tell myself not to do it, but those juices start flowing. It’s like when I’m running against the Bills and (Marcus) Stroud is chasing me. Everything in your body tells you to go out of bounds, but you don’t. Why? I don’t know. Because I don’t want to.”

With Christmas just a week away, Carlee Roethlisberger talks about one of her favorite Christmas day memories – which involved a certain big brother!

You can check out the video of Carlee and her Sooner teammates reminiscing here.