The focus was on mechanics

Home/News/The focus was on mechanics
Previous Next

The focus was on mechanics

“I feel like my feet are a lot faster and quicker, and I feel like the ball’s getting out of my hand quicker.” — Ben, from the article.

From the Pittsburgh Tribune-Review this morning: 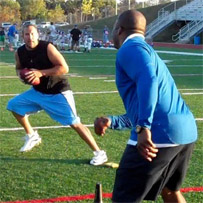 How much his work with a personal quarterbacks coach sharpened Roethlisberger’s game will ultimately be determined by, well, the games.

But Roethlisberger returned to practice last week armed with the confidence that he will be ready for his season debut next Sunday when the Browns visit Heinz Field.

The two first worked together last January in California, and they were nothing if not thorough during their second go-around, as Whitfield spent September shuttling between his home in San Diego and Pittsburgh.

They worked tirelessly on Roethlisberger’s fundamentals while also simulating what he would have done in practices with the Steelers — and what he will see in games.

The two also watched film together, Whitfield said, and got the chance to work extensively on Roethlisberger’s mechanics — something most quarterbacks rarely have the time to do once the regular season starts.

You can see photos of  his workout sessions with Mr. Whitfield here.

A segment of Ben’s interview with Merril Hoge is scheduled to be shown during the broadcast of ESPN’s Sunday NFL Countdown which starts at 11:00 a.m.

According to host Chris Berman, the remainder of the interview will be shown next Sunday at the same time.


That same portion of the interview was made available earlier in the week here.