Quarterback Ben Roethlisberger liked what he saw on day one, even if it was ‘football in shorts.’

“It’s fun to get on the field with the guys,” said Roethlisberger. “It’s always fun because it’s football.”


Welcome back: The start of OTAs meant the return of a few familiar faces to the field, including running back Le’Veon Bell.

“I was excited to have him back out there and excited to get him playing real football,” said Roethlisberger.


Center of attention: Also back on the field was center Maurkice Pouncey, who missed the entire 2015 season with an ankle injury he suffered in the preseason.

“It’s awesome,” said Roethlisberger of having him back. “If feels good to have him back out there. I am excited he is out there, healthy and our leader.”


Big Ben: He is still Big Ben, but there is a little less of him this season as Roethlisberger put in a lot of cardio work this offseason to drop some weight.

“It feels good,” said Roethlisberger. “You want to be the best you can be. You want to win Super Bowls. I just felt like it was the right thing at the right time.” 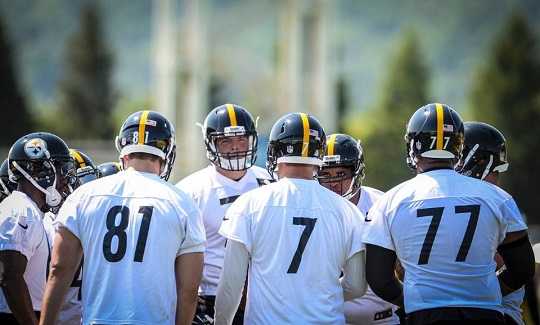 Reaching for 30: The goal for the Steelers offense last season was to score 30 points a game, and while they came up shy of that with 26.4 points per game in the regular season, the goal is still the same this year.

“Coach (Todd) Haley goes over our goals today as we start this process,” said Roethlisberger. “That was one of our goals, 30 points. We were close last year, but didn’t get there so we didn’t reach our goal.”


7 to start: It’s referred to by Coach Mike Tomlin as ‘seven shots,’ a drill where the ball is placed at the two-yard line with the offense looking to punch it into the end zone. The offense throws everything at the defense, and the challenge is simple, stop them.

It was commonly run in training camp last year, and during the season, but Tomlin pulled it out to start off OTAs.

“That’s Coach Tomlin’s new thing, that’s seven shots,” said Roethlisberger. “We were a little surprised we were doing it, then we weren’t surprised because that is what he loves. He loves that little period.”


Time to step up: Roethlisberger knows the offense is going to miss receiver Martavis Bryant, suspended for the entire season, but he also knows that everyone else will pick up their game as a result.


You can check out a video from the interview with Ben here.

And you can see all the photos from Day 1 here.