If you missed his Tuesday time slot during the Cook and Poni Show, here are some excerpts from his show: 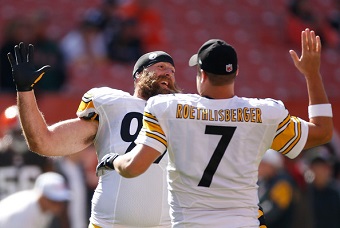 It was a tough one. I saw him on the sideline. He is one of the toughest people I know, and to see him in so much pain really broke my heart. We kind of knew – thought we knew what it was on the sideline talking to him. After the game when I got home, I gave him a call and actually went over to his house to kind off take his mind off of the inevitability of the next day, and just trying to take his mind off of being upset and disappointed. It hurts all of us, I know it hurts Steeler Nation….he just plays at such a high level. His leadership, his energy, his excitement, just everything he brought to the table for so many years here in Pittsburgh. It’s just tough for everybody.


On the loss to the Saints –

There were a lot of emotions after the game. Disappointment and disbelief in myself that I just didn’t play well and for no apparent rhyme or reason…I was disappointed that I didn’t make all the throws that I wanted to make and give our guys chances to make plays. You gotta win the home games. I mean how important that game was to us, I just felt like I let so many people down and that was probably the hardest thing after the game.

At halftime, I sat down and did kind of a self-evaluation on why some of the passes were sailing high – a lot of times I felt like my elbow was dropping down a little too low which made the ball sail on me, so again at halftime after I came out I threw a couple passes and really focused on keeping my arm high coming over the top with it, and it felt a lot better in the second half. Sometimes your mechanics get away from you a little bit.

I watched it on film a couple of times and there were a couple of throws there I just wasn’t quite stepping into the throw so I was throwing off my back foot a little bit, which causes the ball to sail sometimes. You know, sometimes you just feel that rush getting into you and you can’t always step into your throws. I can usually make those throws but for some reason I wasn’t making them as accurately as I wanted to or needed to.

It’s just one of those things that happens to quarterbacks a lot. We hit peoples hands, helmets and shoulder pads when we throw. I have had things happen like that before and it’s not an excuse. you got to play through it. It’s not as big of a deal as I think people probably made it to be.


On the play of Le’Veon Bell –

I don’t know of a running back since I’ve been here that has been able to basically play every single snap. I think that speaks volumes for his conditioning and the work this that he has put in. But you do have to be careful. I hope we don’t run him into the ground, if you will. It’s that stretch of the year where everyone is going to give it everything they have and I know he probably wants to be in there every single play because that’s the kind of player he is.


On the rest of the games going forward –


You can read more & listen to the full podcast here.

Tune in this week:

Ben and his foundation will be featured on the show “NFL Film Presents” on FOX Sports 1!


Check listings in your area for the FOX 1 Channel.