Ben: “Good enough to move on and get ready for Cincinnati”

Home/News/Ben: “Good enough to move on and get ready for Cincinnati”
Previous Next

Ben: “Good enough to move on and get ready for Cincinnati”

Talking to the media today about this Sunday’s game – 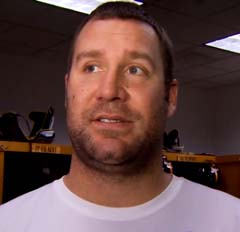 Is there anything that you learn from watching that game (in the film room)?

Oh yeah always. That’s what we spend Monday doing is learning about it. That’s what Monday is for is doing that and then moving on. The second half of that day we spent some time up there at the quarterbacks (film room) and today is strictly Cincinnati.


How did you wrist recover?

Fine. Got the feeling back and am ready to rock and roll today.


Re: Him hitting David DeCastro’s helmet earlier in the game:

Like I said, throughout games it’s not a rarity for quarterbacks to hit hands, helmets, shoulder pads (or) whatever it was. I just know that the play to Antonio (Brown) was the play that actually did the stinging.


Did your hand swell up?

A little bit (but) nothing too crazy. Like I said, it was just loss of feeling in the two fingers and nothing that you can’t play through.


Is there anything different that Cincinnati is doing this year that you notice on film?

(They have a) really good defense. Their secondary is playing as good as any secondary in the NFL right now. (There are) a lot of veterans out there. They have two young drafted guys that don’t even get to play because their veteran guys are playing so well. (They have) a lot of different looks, double-barrel stuff (and) things that we’ve seen in the past. But we’ll always anticipate something new.


Are they still getting a lot of pressure and is that leading to some of the things that they’re doing?

Yeah a lot of pressure. A lot of double-barrel stuff, two linebackers up on the center and bringing some free safety stuff (and) some strong safety blitzes. It forces you as an offense to change protections, to move guys around and just make sure everybody is on the same page for it.


Re: He and the team always playing better with their backs against the wall as underdogs and does that pump you up more:

I think if you need something like that to pump you up knowing that you have four games left in your season and that you control destiny and it’s a division opponent something is wrong with you. I’ve been here a long time and so it’s easy for me to know what this game means and what this part of the season means. We’ll keep an eye on the young guys and make sure that they understand the importance of it as well.


Why have you had so much success in Cincinnati and is there a common theme?

Probably just that they’re a division opponent. I think that makes you want to play that much harder and that much better.


Is it unfair to compare the 2005 run to this team because 2005 was a veteran team and this is a younger team?

Well we haven’t made a run yet so we’ll see what happens. We just have to come out and play good football.


Have any of the inconsistencies eroded any confidence with the offense?

No, not at all. We’re a confident group. We feel that we’ve got some players that are some of the best playmakers in the game of football. We just need to come out and execute and play good football when it counts.

You can read the rest & watch the video of Ben’s interview here.