Ben called in to the Vinnie & Cook Show at 93.7 The Fan this morning for his weekly #1 Cochran Ben Roethlisberger Show while he and his family were on their way to select a Christmas tree. 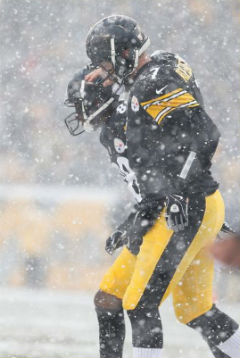 Ben threw for three touchdowns in the loss to the Dolphins, and Le’Veon Bell added 61 yards rushing. He told Vinnie & Cook that he feels that the offense is making progress –


“I’m really pleased with where this offense is. I think we’re getting better every week. Obviously we’re not winning the football games, which is our ultimate goal. But it’s hard to argue with the way the offense has been playing, the success that we feel like that we’re having.”

“I disagree with that. I know that seems to be a hot topic right now about running the ball, but you know, we came out in the first half with a game plan, but the weather kind of dictated what the game plan was going to be. We ran the ball, we threw the ball, we had a big play to Heath in there, we had a touchdown pass. So we moved the ball well the first half. Then in the second half the weather let up and we felt like we were behind a little bit and we felt like we had to get back into the game a little faster. We threw the ball, we moved the ball. We went to a lot of no huddle with me calling the plays.

“I felt like we mixed in some run plays in there, but I don’t think by any means we got away from the run, or we didn’t want to do it and ‘it worked so well’. You know, it also worked well throwing the ball and scoring and mixing the run in here and there. In the third quarter we put up a lot of points and also in the no-huddle there were runs I mixed in there. I thought Le’veon did a good job of getting 6, 7, 8 yards.”

“It’s unbelievable! They take one little blurb of a whole sentence, and it was not directed at Coach Haley like, ‘Go ask him! I don’t know why we didn’t do it!’ (done in an angry voice). It was a,’HE’S our coordinator, go talk to him. If you want to ask about play calling, go ask him about it. He’s the guy that calls the plays. If you want to ask me something about the no-huddle, and I’m calling it, then you ask me.’

“I don’t have any issues with the way the game was called – when he called it, when I called it. I thought it was a good game plan, I thought we executed well. We scored points. Would we have liked to score more, yes! But in no way, shape or form was that directed negatively at him. I have no issues with Coach Haley. I think the offense has been as good as it has been in a long time, we have some guys doing some great things…it gets blown up. It’s by reporters that come in there and ask the dumbest questions after a game and it makes it ridiculous when they take only part of your answer. So it was taken way out of context. I have no problems with Coach Haley. I love where this offense is right now.”


The best record that the Steelers can finish with is 8-8, but Ben told Vinnie and Cook that the team won’t settle for playing spoiler –


Now, about the topic of selecting the perfect tree…does he cut his own or go for the pre-cut variety?

“Both! It depends on what size tree we get…in the past we usually get around a 15-footer, but this year we may downsize to a 10-foot tree, so the 10 foot may be pre-cut. But we’ll go to the tree farm and see what we can find. It’s all about what tree speaks to you (laughs)!


You can listen to his entire show at the bottom of this page!

The NFL’s VP of officiating, Dean Blandino, said today that Ben’s lateral would have stood:


You can read more (and see photos of Ben’s throw) here.