We updated you on this tough little guy and his battle with an inoperable brain tumor called Diffuse Intrinsic Pontine Glioma back in September. Well, as you can see, nothing can stop Richard, who lives life to the fullest every day!

Last week, some of our Nation’s warriors, members of the South Carolina Army National Guard gave him another one of those days to remember! 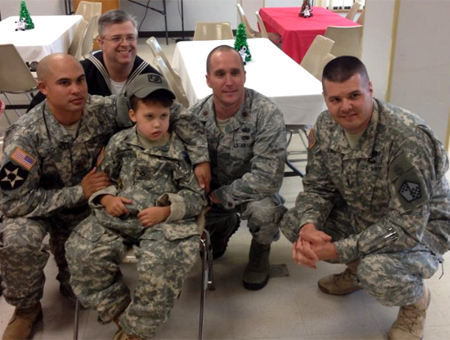 On December 4th, Private Culliver visited McEntire Joint National Guard Base to be a South Carolina Army National Guard Pilot for a Day. He was given the opportunity to sit in multiple rotary wing aircraft, fly an aircraft simulator, and was honored with a set of aviator wings making him an honorary pilot…oh, and he was also awarded the Combat Infantry Medics Badge!


“I can not express adequately with words my gratitude for our service men and women and their families for selflessly serving our country! Then to allow Richard to participate on top of all that just overwhelms me with emotion! These are the faces of the men behind organizing this amazing couple days for Richard and for your taking the time to do it, I am eternally grateful!

“Richard has taken a lot of pride in his opportunity to be a part of ‘serving’ his country and especially the coins he’s collected. Definitely an experience of a lifetime!!” — Private Culliver’s mother, Stephanie.

Thank you to these men and women of our awesome military force for making this 7-year old boy’s Make-A-Wish come true!

And thank you to Sgt. Jorge Intriago for the photo!


You can check out some more great photos and a video on their Facebook page.

You can also stop by and try and keep up with Richard on his Facebook page!


How is Richard doing?


“Richard still has a tumor but it’s MUCH smaller than even at diagnosis. We are currently going through physical, occupational, and speech therapies. Hopefully, he well regain the ability to walk but only time will tell. He should be going back to school next month. There’s always the possibility that the cancer decide to grow again but for the first time in a year that’s not in the front of our thoughts.

“I would just like to say that we appreciate the continued support from Steeler Nation. It means the world to us! We love the team, Richard absolutely loves Ben and Troy.” — Stephanie.