Ben: We’re not going to quit

Home/News/Ben: We’re not going to quit
Previous Next

Ben: We’re not going to quit

Ben completed 23-of-39 for 349 yards, with three touchdowns and no interceptions for a QB rating of 114.2, but in the end it wasn’t enough to get the win against the Miami Dolphins.


His post-game Q&A with the media: 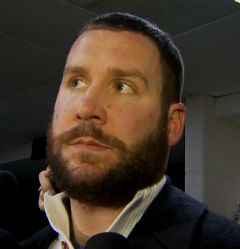 Did you guys practice that last play?

No, that’s just trying to make something happen.


This kind of puts you in a pretty tough spot…

Yup. But we’re not going to quit, we’re going to keep playing, come back tomorrow and get ready to go!

I don’t know. You know, I think the weather early dictated that we had to run the ball a lot. But we were still able to do some good running of the ball early, and the second half it kind of died down a little bit with the snow, so we felt that we could throw the ball and I thought we did a good job of doing that. We just didn’t make enough plays.


Ben, this is the first time in your career you’ve gone two consecutive non-winning seasons. Do you think, like this team needs to be ripped up in the off-season?

I’m not going to answer that question. We’re just going to give it everything we have everyday, and there’s going to be no quit from anybody!


Ben, was that final play all improvisation?


Did you think Antonio scored [that touchdown at the end]?

Wasn’t sure. Thought it was but then obviously saw the ref wave his arms.

You can watch video of Ben’s interview here.

*And though it did happen in a loss, CONGRATULATIONS are still in order for Ben once again – he surpassed Terry Bradshaw’s record (212) with his first touchdown of the game (1st quarter to Emmanuel Sanders) for the most touchdowns in franchise history!