Home/News/Thank you Steeler Nation
Previous Next

…for your continued prayers for little Steelers fan Richard Culliver! They’re working in a big way!! 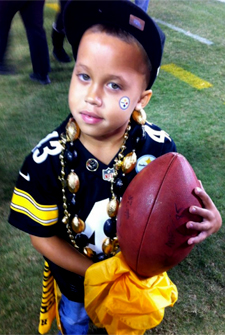 Remember Richard? On October 4th, 2012, Richard was diagnosed with an inoperable brain tumor called Diffuse Intrinsic Pontine Glioma. His story was posted here in a “Shout Out” on October 10th, 2012.

Jason “Moose” Cunningham and the members of Augusta SteelMasters, a Steelers fan club based in Augusta, Georgia stepped up. SteelMasters purchased game tickets and assisted with the lodging for Richard and his family to make the trip to Tennessee’s LP Field from their home in South Carolina to see the Steelers play the Titans that week. Moose and the Culliver family shared the experience with us through photos and a story.

The experience left Richard feeling like a celebrity, in fact he asked his mother:

“That was the first time we’ve done the victory formation, I believe this year, to take a knee to end it, and I wanted to keep that. There’s a little boy that’s very sick that has been on my website, and has been checking in…and I want to send that to him.”

Since then, we have been keeping up with Richard through his Facebook page, Richards Journey and tonight…


We have a wonderful update to share from Richard’s mother, Stephanie: 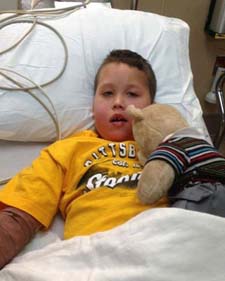 “What an amazing day!!! Praise God for all he’s done and is doing in our lives!!

Today his tumor is so small you can barely see it. It’s way smaller than when he was diagnosed!!

So we only saw his doctor for a few minutes. We will go back soon for a followup. For now this is what we know:

We will get Richard back in school. He will begin therapies to improve his motor skills. He will also come off of hospice care (That one is sad because we love them all so much and will miss seeing them).

We will go to the clinic and spend more time with his oncologist later and get more details and put a plan in place.

Today is a day of celebration in our house.

I’m sitting beside my boy in awe of what God is doing in our lives!!! We are so undeserving but so grateful for the blessings God has provided us!” — Stephanie


Again, thank you Steeler Nation for keeping Richard in your prayers and for the continuing emails asking for updates on this strong young man!