You ask me about how disappointing a loss is? I think that speaks for itself, for you guys that know me. — Ben, during his post-game interview after a 22-17 loss to the Jets. 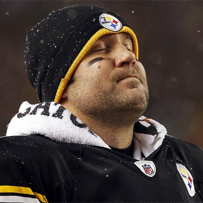 Big Ben nearly pulled off a game-winning drive for the ages, almost going 92 yards in two minutes with no timeouts. But he came up just short as two goal-line passes were batted down to end the game. It was still an impressive showing for Roethlisberger, who actually throws better in the cold and snow.

From the Toronto Sun:

The Jets defense bent, but didn’t break as Ben Roethlisberger led the Steelers on a drive in the final 2:08 of the game.

Roethlisberger ran 22 yards for a first down and completed passes of 29 yards to Emmanuel Sanders, 18 yards to Mike Wallace and 16 yards to Antonio Brown to take the Steelers from their own 8-yard line to the New York 10.

But his throw to tight end Matt Spaeth in the left side of the end zone with zeroes on the clock wasn’t close to being completed.

From the Altoona Mirror:

The Steelers were once again the victim of questionable officiating. First, a bogus helmet-to-helmet roughing call on Ryan Clark set up one of the Jets touchdowns. Then, a blatant pass interference committed against Emmanuel Sanders that should have set Pittsburgh up with a 1st-and-goal from the 8 with about 0:24 left, went uncalled.

Stat Line: Ben completed 23-of-44 passes for 264 yards with one touchdown and no interceptions.

“Well we knew we had a long way to go. I will never blame Matt. I thought he made a great effort. He played a great game today. He made a lot of big time catches and big time plays. He did a great job stepping up especially not knowing if Heath would play or not. I will take this one on me because I need to make more plays. I would never blame those guys, it is on me and I can’t let it happen and I have to get better going forward.” — Ben, when asked about the play of Matt Spaeth.


From the Pittsburgh Post-Gazette‘s Ed Bouchette:

The NFL notified the Steelers this evening that even though they lost, they clinched at least a wildcard playoff spot based on a tiebreaker that would go their way on strength of schedule.

You can read post-game quotes here.