Looking ahead to Thursday’s match-up

Home/News/Looking ahead to Thursday’s match-up
Previous Next

Looking ahead to Thursday’s match-up 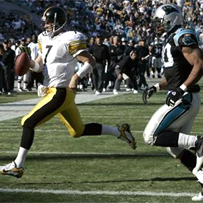 From The Sports Network this afternoon:

Pittsburgh had vaulted to the top of the AFC North pack on the strength of a four-game win streak highlighted by a hard-fought road victory over its chief competition for the division crown, the Baltimore Ravens, in early December.

Though Pittsburgh and Baltimore sport identical 10-4 marks heading into the regular season’s final two weeks, the Steelers do own a superior record in division play, meaning the Black and Gold would claim both the AFC North title and a much-desired opening-round bye in the upcoming conference playoffs if they can defeat the Panthers and follow up with a win at Cleveland in the finale.

The Pittsburgh offense benefits from its balance, blending the passing talents and field presence of quarterback Ben Roethlisberger (2600 passing yards, 14 TD, 5 INT) with the NFL’s eighth-ranked running game (122.1 ypg) to form what can be a difficult combination to defend. Add in the field-stretching skills of speedy wide receiver Mike Wallace (53 receptions, 1048 yards, 8 TD), who’s averaging nearly 20 yards per catch and burned a well-regarded New York secondary for 102 yards on seven grabs a week ago, and it’s safe to say the Panthers may not have an easy time on their hands on Thursday.


You can read the rest of their Game Preview here.

The Steelers hold a 3-1 edge in its all-time series with Carolina, and has won each of its last three head-to-head meetings with the Panthers. Pittsburgh took a 37-3 road decision in the most recent match-up in 2006, and were 30-14 winners when the teams last met iat Heinz Field in 2002. The Panthers’ only win in the series was an 18-14 victory in 1996.

Check out this interview/article with Ben and and some of his teammates from the Pittsburgh Post-Gazette’s Ed Bochette entitled, “Roethlisberger healing in many ways”.

Quote from the article –

“Obviously, there’s been a lot of scrutiny against him this year,” Keisel said. “The best way you can counteract that is to go out and be a better man, be a better teammate, be a better guy in the community and I think he’s done all that.”