Ben announced the third grant of the 2011 season from The Ben Roethlisberger Foundation at The Giving Back Fund this evening. 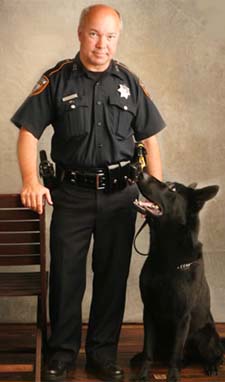 The foundation will be distributing a grant to the Harris County Sheriff’s Office, in Houston, TX, where the Steelers will play the Texans on Sunday, October 2.

The Harris County Sheriff’s Office will use the grant to increase the size of their existing K-9 corps by purchasing a trainable, dual-purpose canine that will then be passed along to their own certified staff for narcotics detection and patrol-related training. This addition will bring their unit total up to 16 certified dogs.

“Increasing the number of K-9s that can detect drugs, bombs and hidden humans has been important in my effort to keep our community as crime-free as possible,” Harris County Sheriff Adrian Garcia, a Houston native who has rooted for the Texans and Oilers to triumph over the Steelers for years.

“Maybe it helps that we both wear Black and Gold!” Garcia added, referring to the Steelers and Sheriff’s Office uniform colors.

A tweet from the Houston based “K9’s4cops” organization this week not only thanked Ben for the grant but told their followers that “our next crime fighting K9 ‘Big Ben’ will proudly wear the #7 on his collar!!”


More on the K9’s4cops organization:

“K9’s4cops” is a charitable, non-profit organization whose aim is to raise funds for Houston and cities nationwide urgently requiring additional K-9s. Police work is dangerous work. A K-9’s job is to step in front of danger. Our mission is to ensure that every law enforcement officer in need of a K-9 has one at his side, well trained and ready for action.

Given the crime-fighting value of K-9s, you may find it surprising to learn that, with budget cuts, cities across America are having a hard time funding the acquisition and training of these wonderful animals. Houston, for example, has only 14 K-9 units to assist in the patrolling a city of 2.3 million residents, aside from dogs used by the DEA and at the airports. Depending on their specialty, each dog costs between $10,500 to $12,500. Houston’s police budget is now so tight no funds exist to replace a single K-9 injured or killed. Not one!

That’s why this grant from The Ben Roethlisberger Foundation was so important…and welcome!


You can read more and even make a donation here.

*Thank you so much to Ms. Lara-Carreno of “K9’s4cops” for the use of the photo above (of Harris County Deputy Sheriff David Thomas and his K9 partner, Boomer).