“The Northern Kentucky University Police Department is honored to receive this grant from the Ben Roethlisberger Foundation. The funding will allow us to ensure the safety of our K-9 officer, Arritt, who works to keep our campus and region safe. We thank and commend the Foundation for its dedication to public safety service K-9 units.” — Lieutenant John Gaffin, Interim Chief of Police, Northern Kentucky University Police.”

Today, Ben announced the twelfth and thirteenth grant of the 2016 season from The Ben Roethlisberger Foundation at The Giving Back Fund.

The Foundation will be distributing grants to the Erlanger Police Department and the Northern Kentucky University Police not far from the Cincinnati, Ohio area where the Steelers play the Bengals this Sunday, December 18th.

The Erlanger Police Department will use their grant to purchase a new K-9 officer to assist with protecting and serving the Kenton County community.


“The Erlanger Kentucky Police Department is fortunate to be receiving a $10,000 check from the Ben Roethlisberger Foundation. Our mission is to help and assist any agency at any time upon any requests. The funds will go towards the purchase of a brand new K-9 unit which includes the dog and training for a handler.” — Officer Edward Bailey, Erlanger Police Department. 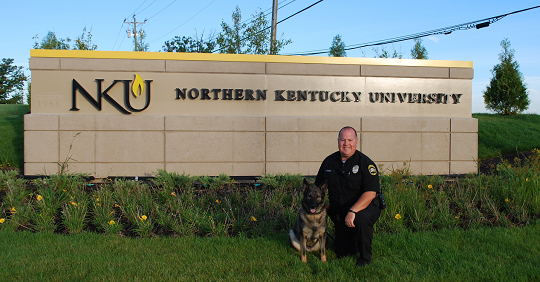 The Northern Kentucky University Police will use their grant to purchase and install a temperature monitor in the designated K-9 police cruiser.


“Arritt (photo above with his partner, Officer Murray) is an explosives detection canine provided to the University in 2012 via a grant from the Department of Homeland Security. Arritt and Officer Murray provide immediate and specialized response to bomb threats and unattended packages. This team conducts searches for a variety of explosive materials near building exteriors, parking lots, office areas, vehicles, packages, people in and around the campus, and assists other agencies in the region.” — Lieutenant John Gaffin, Interim Chief of Police, Northern Kentucky University Police.

During the 2016 NFL season, Ben’s foundation is distributing grants to K-9 units of police and fire departments in the cities and surrounding communities of each regular season away game for the Steelers. The Foundation will also distribute several grants to the Pittsburgh area. The Ben Roethlisberger Foundation invited police and fire departments across the country to submit proposals detailing their needs.

This marks the 10th season that the Ben’s foundation has distributed grants to K-9 units. The mission of the Ben Roethlisberger Foundation is to support K-9 units of police and fire departments throughout the United States, with a particular emphasis on support for service dogs in Pittsburgh, PA. Ben also supports Make-A-Wish.

The Ben Roethlisberger Foundation distributed more than $170,000 in grants to K-9 units around the country during the 2015 NFL season, including $93,250 in the Pittsburgh community. The Foundation has distributed in excess of $1.5 million since 2007.

You can support future K-9 grants by joining Ben’s crowdfunding campaign on https://pledgeit.org/big-ben. Big Ben is pledging $1,000 per touchdown this season to his foundation. Supporters can increase the impact by pledging to donate any amount per touchdown.