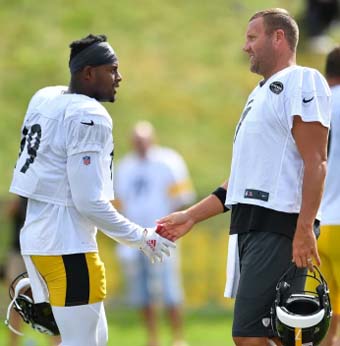 The final practice of training camp was officially called at 4:25 this afternoon due to weather, but there was still a lot to like about the Steelers’ Saint Vincent College experience from quarterback Ben Roethlisberger’s perspective.

“We wanted to come in and get some work together, some young guys, new guys,” Roethlisberger maintained. “Worked the no-huddle, worked two-minute, worked red zone, so I think there was some good stuff.

“We got to see what guys were going to do with pads on, too, in terms of physicality, so I think it was good.”

Roethlisberger didn’t participate in 11-on-11 drills in the non-padded practice, other than to run a two-minute drill that covered 52 yards in 1:01 but was ultimately stopped 4 yards short of the goal line and the required touchdown.

But he threw in position drills to wide receivers he maintained are showing the growth he was hoping to notice.

“James Washington, I thought, had a great camp,” Roethlisberger continued. “‘Crief’ (Donte Moncrief) we didn’t get to see a lot of because of the finger but he’s starting to come back. And I think what we’ve seen from JuJu (Smith-Schuster) is what we all anticipated, something special.”

Roethlisberger was also impressed with what he saw from inside linebacker and 10th-overall draft pick Devin Bush.

“In practice it wasn’t anything special, but he wasn’t making mistakes,” Roethlisberger observed. “And then you watch the game (against Tampa Bay), you see the box score. I know he had a bunch of tackles and made some plays, he’s just there. He’s just doing things and he’s doing the right thing and you don’t hear him getting hollered at because he’s doing wrong.

“To me, that’s important for a guy at that position. It may not be all the special and ‘wow’ plays you make, but when you’re not screwing up that’s just as important.”

You can read more from Mr. Prisuta & watch video of Ben’s interview with the media here.

You can also sit back, relax and check out the hard-working Steelers players in “The Best of Steelers Training Camp” album.