Ben: “I love where my life is right now with my family and with football”

Home/News/Ben: “I love where my life is right now with my family and with football”
Previous Next

Ben: “I love where my life is right now with my family and with football”

“Without a doubt, he is a high-echelon quarterback in the NFL. He’s consistently productive and he has been one of the toughest players I have seen in the league. I only coached him three years, but he played with a number of different injuries. I have never seen a more competitive guy on Sundays. He has a great feel for the game.” — Bill Cowher.

“Big Ben reflects on a decade as quarterback” 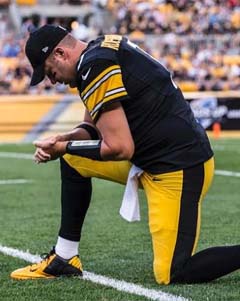 The first decade of Ben Roethlisbeger’s NFL career appears as a kaleidoscope, bursting with color and breathtaking images here, there, everywhere.

From bright lights to dark shadows, from uncommon success to humiliation, it has been some ride for the Steelers quarterback, his teammates, his employers and his fans.

No one knows that better than Roethlisberger, who heads into his second pro decade against Cleveland today at the top of his game.

“In 10 years, I’ve had a lifetime worth of experiences, both on and off the field.”

What can a decade yield for one quarterback? Three Super Bowls, two Lombardi Trophies, virtually every Steelers passing record, the only rookie NFL quarterback to go 13-0, no losing seasons, a horrific motorcycle accident, many broken bones and sprains, a four-game suspension, a wedding, the births of two children. Is he, at 32, a better man and quarterback for it all?

“I love where my life is right now with my family and with football,” Roethlisberger said, reflecting one day this summer on all that has occurred since he embarked on his pro career as the Steelers’ first draft pick in 2004.

The Steelers love where he is, as well. He delighted, frustrated and even angered many of them over the past decade, but they agree with his own assessment of where he finds himself today.


“I think Ben is in the prime of his career,” Steelers president Art Rooney II said. “He looks to be in great shape, looks good on the field. I think he’s primed and ready to go.”

Roethlisberger, who played every snap last season, has missed nine games because of injuries and one, the 2006 opener, after an appendectomy. He was rested twice in meaningless season finales before the playoffs and suspended by the NFL for four other games. He should have missed more, including a couple in 2011 when he had a severe ankle sprain in the first half of the 13th game against Cleveland. 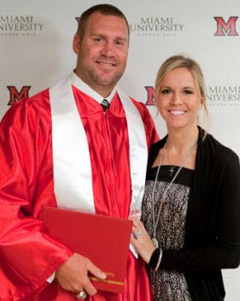 “It was a pretty serious injury,” Colbert said. “I went down at halftime to sort of comfort him, to say, ‘Hey, you’ll be fine; in four, five weeks, you’ll be good.’ He’s in there getting strapped up, talking to [quarterbacks coach] Randy Fichtner about what they were going to do in the second half.”

There were many examples of that toughness, including his return to start training camp barely six weeks after he sustained multiple facial fractures in that 2006 motorcycle accident that required seven hours of surgeries. His head bounced off a car windshield and hit the street.

“He almost lost his life,” Cowher said. “He went through training camp, but didn’t take any hits. We had to ease him back into it. It took him at least half a year to feel comfortable back in that pocket, which was totally understandable.”

There would be another offseason wreck four years later, only this time his personal and professional life hit the pavement, splattered in a humiliating incident in the college town of Milledgeville, Ga.

Milledgeville and its repercussions proved to be a crossroads for Roethlisberger.

“It forced me to grow up really quick,” he said.

It knocked him for a loop like no sack ever could.


“Absolutely. It was like, ‘OK, you need to get your act together.’ To me, that meant football, it meant family, it meant life, friends,” Roethlisberger said. “It was a total awakening. The Lord used that as a slap in the face, but he hit me with a brick.” 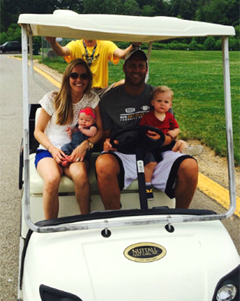 Afterward, his parents moved from Ohio to the Pittsburgh area. He married in July 2011 and his wife Ashley gave birth to a son in November 2012 and a daughter in March. He went back and earned his degree from Miami University two years ago (“How do you tell your kids how important school is if you don’t even have your degree?”). He no longer rides a motorcycle, although he says he will when his career ends.

He was named the Steelers’ 2013 Walter Payton Man of the Year, which recognizes a player’s excellence on the field and his community service. The local Pro Football Writers voted him for The Chief award after the 2010 season for his cooperation with them.

By many accounts, the personal actions of the Roethlisberger of the past four years have been quite different from the ones of his first six with the Steelers. Many have noticed the difference.

“Above it all, watching him grow off the field – a mature father, husband, and listening to him talk and speak as I see in the media – he’s so much more mature now,” Cowher said. “He has a great sense of perspective now. He’s in a great place.”


You can the rest here.


*Thank you to Mr. Bouchette.