“That is why we put the work in. That’s where it all comes from. We make an adjustment last minute, no one blinks, no one flinches. They run the proper play and we get into field goal range.” — Ben 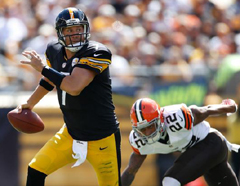 After all these years, Ben Roethlisberger is still making the Browns pay for passing on him in the draft in 2004. He can improve to 18-1 over the Browns with a victory and 10-0 against them at home. He’s also looking to go to 8-1 in home openers — and is still seemingly indestructible.

“When you’ve got a quarterback that’s damn near impossible to bring down, it opens up a lot of room for success,” said Browns defensive end Billy Winn. “One guy will miss a tackle, two guys will miss a tackle and basically all of his receivers are just out there playing backyard football, getting open and creating opportunities. You have to have multiple guys getting to the quarterback. It’s not good enough having one guy back there. You have to have constant pressure.”

“Roethlisberger reads and the Browns fail” 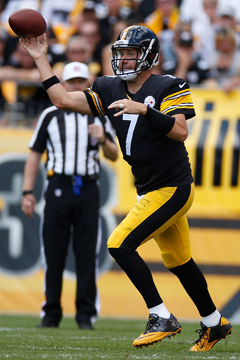 Sunday’s 30-27 Steelers win in Heinz Field was greatly influenced by two plays, one the Steelers made, the other the Cleveland Browns didn’t. Taken on their own, they were two plays in a game that had 131. Taken in the context and situation of the game, the two plays had large significance.

Both came on the last possession for each team with the score tied at 27.

Pittsburgh’s was successful, and led to the game-winning field goal.

Cleveland’s was not, and contributed to a punt that gave the Steelers the ball for their game-winning drive.

For the Steelers, Roethlisberger’s savvy and poise were on display with 20 seconds left. As he walked to the ball at the Cleveland 44-yard-line, he realized the play the Steelers had called would fail.

“[The Browns] showed a coverage that the initial play that we called wasn’t going to be good with,” Roethlisberger said.

So he signaled to Markus Wheaton and told him to run a different route. Wheaton broke open against what looked like zone coverage by the Browns, and his 20-yard reception at the Browns 24 set up Scott Suisham’s game-winning field goal. 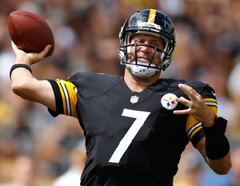 Ben Roethlisberger worked his comeback magic once more, leading the 33rd comeback win of his 11th-year career. Roethlisberger fired a 20-yard slant to Markus Wheaton down to the Cleveland 24 yard-line, spiking the football with :05 left. Shaun Suisham calmly banged a 41-yard field goal to save the Steelers.

The Steelers heeded their summer-long mantra of starting fast after last year’s 0-4 start doomed them to a second consecutive 8-8 season. You can’t start much hotter than Roethlisberger did, firing for 278 yards on 16 of 22 passing, the highest first-half passing yardage of his career. What he did best was shrug off a diving interception by linebacker Karlos Dansby as if it never happened.

You can listen to Ben’s post-game interview here!

And you can check out some photos from the game here.