Watch it on Wednesday!

Home/News/Watch it on Wednesday!
Previous Next

Watch it on Wednesday!

Ben will be featured on the prime time special “Under the Lights” on Wednesday, Sept. 10th at 9:00pm ET on CBS.

The one-hour special will be hosted by Jim Nance, the CBS Sports‘ lead NFL play-by-play announcer and the voice of Thursday Night Football, and will celebrate some of the greatest and most memorable moments in the history of prime time football. The show will also preview the Thursday Night Football schedule.

If you are unable to watch on Wednesday, you can tune in to a re-airing of the special on NFL Network on Tuesday, September 16th at 10pm ET.

For GMC’s Never Say Never Moment of Week 1 in the NFL: 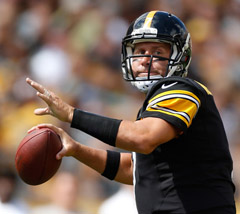 Steelers hold off furious Browns comeback: The Pittsburgh Steelers stormed out to a 27-3 halftime lead, and appeared to have the game well in hand. However, the second half was another story as the Cleveland Browns scored 24 unanswered points.

The Steelers managed to shift momentum late in the fourth quarter and get into position for Shaun Suisham’s game-winning 41-yard field goal in a 30-27 win. The win helped quarterback Ben Roethlisberger improve his career record to 18-1 against the Browns, the best mark of any quarterback against one team since at least 1970 (minimum 15 starts).

From sportswriter Tom Reed at the Cleveland Plain Dealer –

“Ben Roethlisberger is a 6-foot-5, 241-pound quarterback armored in pads and coated in Teflon. He extends plays with his feet, shakes off would-be sackers like a golden retriever spraying bath water and makes defenders squirm in their seats during Monday morning film sessions.”