Home/News/“I’m anxious, excited, a lot of emotions”
Previous Next

From ESPN’s James Walker from his AFC North Blog this afternoon: 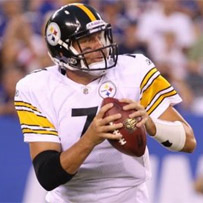 Steelers quarterback Ben Roethlisberger says he has a mix of emotions heading into Sunday’s game against the Cleveland Browns.

“I’m excited. But I’m not to the peak of my excitement yet, that will probably come later,” Roethlisberger said before Wednesday’s practice. “I’m anxious, excited, a lot of emotions. But, like I said, a lot of it is under wraps right now because we’re focusing on practice.”

The Steelers (3-1) are off to a fast start even without their No. 1 quarterback.

It is now Roethlisberger’s job to keep Pittsburgh’s momentum going. The Steelers need his arm because they are last in the NFL in passing, but they have to be wary not to sway too far in that direction.

“I think we will be very balanced, and we’re going to take what they give us,” Roethlisberger said of the Browns. “If they’re loading up the box, we will try to throw it. If they’re sitting back, we will run the ball.”

From an interview with Ben about Sunday’s game against the Browns at Steelers.com:

“They’re a lot better team than people assume and give them credit for,” said Roethlisberger of the 1-4 Browns. “They do a lot of different things on defense, a lot of different looks and blitzes and schemes that kind of keep you on your heels.”


You can read the entire interview here.

You can watch video of interviews with Ben and his teammates today here.

Ben sat down this week at his parents home with Bill Cowher for an interview which will be seen on Sunday during NFL Today on CBS which starts at 12:00 p.m.

And don’t forget, the rest of his interview with Merril Hoge will also be seen on Sunday during NFL Countdown on ESPN which starts at 11:00 a.m.


*Thank you to Becky! 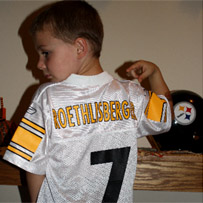 If you know a young fan who would like their picture added to the “Lil’ Fans” album in the photo gallery, just send along their photo (dressed in their Big Ben gear or posing with Ben) and we’ll be happy to post it!

If you have a fan story and photos you would like to share, you can send them as well!

You can send them to BigBen7website@gmail.com!