No cape for Ben

Home/News/No cape for Ben
Previous Next

No cape for Ben

From Sam Farmer of the L.A. Times in an article entitled, “Ben Roethlisberger tries to turn back time”: 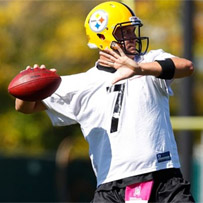 It took only one play for the Pittsburgh Steelers to realize Ben Roethlisberger hadn’t changed a bit.

“He threw me a long bomb right on the money,” receiver Mike Wallace said about the first play of Roethlisberger’s return to practice last week. “I guess it was kind of like a statement, letting them know, ‘I’m here.’ ”

But to hear Roethlisberger tell it, the old Big Ben is long gone.

Among the most vocal and visible Roethlisberger critics has been Hall of Fame quarterback Terry Bradshaw, who won four Super Bowls with the Steelers.

Roethlisberger said he made an effort to extend an olive branch to Bradshaw within the past two months, leaving an un-returned voicemail.

“I’ve always said how awesome he is,” Roethlisberger said of Bradshaw, who could not be reached for comment. “He has everything I want: Super Bowls, Hall of Fame, maybe the greatest to play quarterback — definitely as a Steeler. All the things that he’s said, I’m not really sure where they came from, but no hard feelings on my side.”

You can read the entire article here.

From Jason Whitlock of FOX Sports in his column entitled, “Look for a new man in Big Ben return”:

With Roethlisberger in the lineup, the 2010 Steelers are potentially as good as any team we’ve seen in the free-agent, salary-cap era. I don’t see a flaw. Their defense is dominant. Their offense can run the ball. They have solid special teams. Mike Tomlin is a young Bill Cowher. Their lone weakness was the passing game and pass protection. Big Ben cures both of those problems.

A lack of locker-room chemistry was the last hope for Pittsburgh opponents. But it sounds like all of the Steelers understand how much they need Roethlisberger and they are rallying around Big Ben.

You can read his entire column here.

From Scott Sargent of Waiting for Next Year in his column entitled, “Roethlisberger: McCoy’s First Start Will Be ‘Quite an Experience’”: 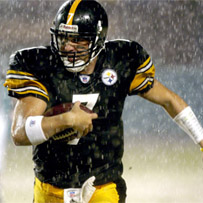 “He’s in for a heck of a rivalry,” said Roethlisberger [of McCoy] via conference call. “Coming into Hines Field, it’s going to be quite an experience for him. Being from Texas and the Big 12, he’s had some great rivalries playing against Oklahoma. I’m sure the crowd won’t overwhelm him, but he’s going to get to experience really quick what an AFC North rivalry is like.”

Since Roethlisberger entered the league in 2004, he has done nothing but win. He was Rookie of the Year, has been to a Pro Bowl and has already amassed two Super Bowl rings. Throwing for 127 touchdowns with a career passer rating of 91.7. His first snaps in the NFL came when then quarterback Tommy Maddox was injured by then Raven defensive back Gary Baxter.

Roethlisberger would go on to throw for over 170 yards and complete two touchdown passes, though in a losing effort. Said loss would be one of the very few that the Steelers quarterback would suffer from that point until present day where he has a winning percentage of .698 – fifth highest in the history of the NFL among those with at least 80 starts.

“I remember my first start being fast,” said Roethlisberger. “It was pretty much just a blur for me.

“It’s always tough to start on the road. The thing I would say to him is to just be patient and let the game come to him.”

You can read the full blog here.