Ben is named AFC Offensive Player of the Week

Ben is named AFC Offensive Player of the Week

This marks the seventh time that Ben has been honored as the AFC Offensive Player of the Week.


From Teresa Varley, Steelers.com this morning: 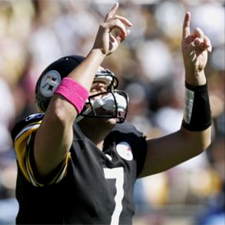 Quarterback Ben Roethlisberger was named the AFC Offensive Player of the Week for his performance against the Tennessee Titans.

Roethlisberger threw five touchdown passes and tallied 228 passing yards in the Steelers 38-17 win, while playing with an injured foot.

“I just don’t want to let my guys down. I want to give them my best,” said Roethlisberger after the game of playing injured. “I’ll be there until they take me off in a cart, which has happened before. I want to give them everything that I’ve got and put this team and this offense in the best position that I can to win football games. It is what it is, as coach always says. Regardless of injury, there are lots of guys going through it, we just have to go out and do our best. “

Roethlisberger is the first Steelers player to win a player of the week honor this season.

Ben spoke to the media after practice. A few highlights…. 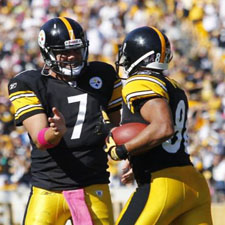 On his play last Sunday –

“I feel like I left some things out there. You always want to try to be better. You never want to be satisfied with where you’re at.”


On playing with the sprained foot –

“When it’s your feet it’s hard because you’re always on them, so it’s every single play. It’s not like it’s a left wrist or a left shoulder where you hurt it when you get hit.”


On the level of the pain –

“It was up there. But you find a way to manage it.”


On the approach of the offense against the Titans –

“They sat in a lot of zone coverages and left the underneath stuff open. I know all you guys think that you called it and it was ‘a breakthrough performance,’ because you guys wanted me to get the ball out of my hand faster. But, really, it was what they gave us, and we took advantage of it.”

Ben Roethlisberger is getting close to Terry Bradshaw’s record for career passing yards of 27,989. Ben needs 122 to hit 24,000 so some time next season he should pass Bradshaw, once an unthinkable achievement.