Home/News/Project Bundle Up
Previous Next

From Teresa Varley, Steelers.com this evening: 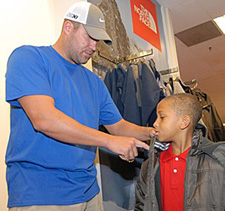 Steelers players took the kids shopping at Macy’s at Ross Park Mall as a part of Project Bundle-Up, a Salvation Army program that provides winter outerwear for needy children in Southwestern Pennsylvania.

“It’s so nice outside today and they are saying, ‘I don’t want a coat, it’s not cold,’” said Ben Roethlisberger, who was joined by his wife Ashley. “But it’s nice to know when the winter comes and the snow is here they will be warm. It’s an awesome thing. And it’s so much fun once you get them under control and realize what they need. We enjoyed picking out stuff and I hope they did.”

The kids were able to select a winter coat, as well as a hat, scarf and gloves, and in many cases players purchased extra items for them, from socks to sweatshirts, bringing plenty of joy to the youngsters.


You can read more from Ms. Varley about the event here.

You can see the photo gallery here.

Ben and his teammates “weighed in” on Troy’s new wax figure that was unveiled today at Madame Tussaud’s Wax Museum in New York.

You can watch the video here.