*Update: We have a winner! 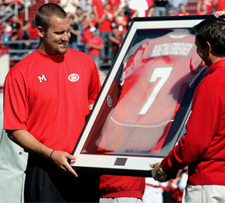 Ben was honored with the retirement of his college jersey during a pre-game ceremony on the field at Yager Stadium at Miami University in Oxford, Ohio.

He became just the third RedHawks player to have his jersey number retired and the first in 34 years.

Ben led Miami to a Mid-American Conference championship and a No. 10 final ranking during his junior season. Twice that season he led Miami to wins over Bowling Green State University, including a 49-27 win in the MAC Championship.

Ben earned Third-Team All-America honors during his record-breaking junior season and became just the third Miami player to capture the Vern Smith Award as the Mid-American Conference Most Valuable Player.

Also joining Ben on the field for the ceremony were his parents, and the family of his beloved coach, Terry Hoeppner, who had passed away the previous June. During a half-time ceremony, the Hoeppner family was presented with a special plaque in honor of the coach’s memory, which now hangs in Yager Stadium.

To commemorate the fourth anniversary of the retirement of Ben’s Redhawks jersey, we are having a contest…. 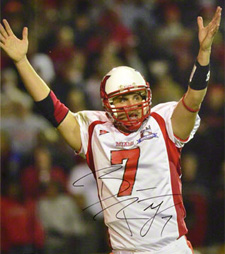 The 34th emailer with the correct answers will win an autographed 8×10 photo of Ben from his college days (photo at left) and a sealed DVD of the Redhawks Championship Season, “Rewriting the Book – A Tribute to a Storybook Season”!

The questions – just fill in the blanks:

1. Ben is just the third quarterback in MAC history to pass for _____ yards in __ seasons.

2. Ben broke the _____-yard plateau for his career, making him just the ___ player in NCAA history and just the fifth MAC quarterback to accomplish the feat.


Hint: The answers can all be found on the website with just a click on a link or two, or three! Remember, there is more than one page on this site…but you only need one page to find what you’re looking for!


However, before you email, please follow these two rules:

1. Emails for the contest WILL NOT be accepted until 12 NOON ET and after (this gives fans in different time zones a chance to participate). If you email before that time, your email will be discounted.

2. Please, just one email per email address only (subsequent emails from the same address will be discounted).


*UPDATE: We have a WINNER!

Congratulations to Shelley Caldwell of Monroe, Louisiana! She was our 34th emailer with all the correct answers:

1. Ben is just the third quarterback in MAC history to pass for 3,000 yards in 3 seasons.

2. Ben broke the 10,000-yard plateau for his career, making him just the 30th player in NCAA history and just the fifth MAC quarterback to accomplish the feat.


– The answers could all be found by clicking on the Articles page and clicking on links in the 2007 section on the retirement ceremony.

Thank you to everyone who entered and stay tuned…we’ll have a couple more contests this season!