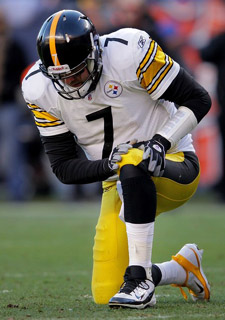 The Steelers (12-5) lost to the Broncos tonight despite Ben rallying the injury-depleted Steelers from a two-touchdown halftime deficit with 10 points in the final 10 minutes.

“Any loss stings for me,” said Ben during his post-game press conference. “This one’s no different. It’s hard to put it into words right now. It’s a frustrating thing.”

Pittsburgh called tails for the overtime coin toss, and it came up heads. They were nearing field goal range in the final minute of regulation but the Broncos sacked Ben three times on that final drive, forcing a fumble that he recovered.

“We were moving it and we had a shot,” Ben said. “Someone got, it felt like a finger, on the ball and knocked it out. After that, you’re trying to throw a 70-yard Hail Mary and that’s hard.”


Quotes of the Evening:

“I feel for Ben Roethlisberger. The guy played a courageous game on a sore ankle, escaping the pocket to make a sensational throw to tie the game late in the fourth quarter. It was vintage Big Ben, the right play at the right moment, and I’m convinced somehow, some way, he would have done it again had he gotten the chance in OT. Only he didn’t.” — Clark Judge, CBS Sports Senior NFL Columnist.

On a positive note…

You can read more post-game news at Steelers.com