On October 20th, The Ben Roethlisberger Foundation distributed a grant to the Avondale Police Department, in Avondale, AZ, just outside of Phoenix where the Steelers played the Cardinals on Sunday, October 23rd. 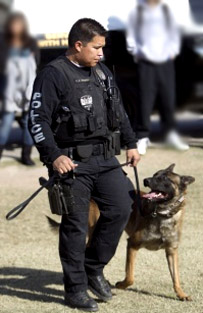 Today, the Police Department announced what they did with their grant – a new bite suit, a ballistic vest and two portable kennels for the unit’s two dog teams: Officer Tony Fernandez and Ranger and Officer James Sinohui and Ringo!

“It (the equipment) protects them from weapons and when they’re contacting or pursuing possible armed suspects, and it increases the proficiency and safety for not only the K-9 but the handler as well,” Sgt. Todd Love said.

The new equipment will ensure that both dogs have a ballistic vest, that each officer’s truck has a vault and that both officers have a portable kennel for their dog. The vaults are important because they keep the contents away from the dogs and allow the officers to operate independently, Love said.

The grant included money for training. The department sent Fernandez and Ranger to California last month for three days of training on dealing with stress while on calls, transferring training to reality and resolving tactical dilemmas. It is looking for training for Sinohui and plan to send him and Ringo.