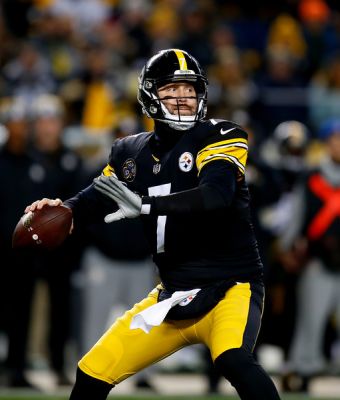 When Antonio Brown utters those words, which he has done on numerous occasions, he means it. Ben Roethlisberger is definitely his guy, and the guy who makes the Steelers offense tick.

And once again, Roethlisberger led the Steelers to a come-from-behind win, defeating the Ravens, 39-38, en route to winning the AFC North title and for Roethlisberger, the AFC Offensive Player of the Week.

Roethlisberger completed 44 of 66 passes, both career highs and team records, for an incredible 506 yards. Roethlisberger threw for two touchdowns, and no interceptions, against a defense that was No. 1 in takeaways and ranked No. 1 in interceptions in the NFL going into the game.

“Ben’s a Hall of Fame quarterback,” said Brown. “He is so much fun to play with. He made some amazing throws. He makes them every day. He is a general, a warrior, a leader. I am glad I got to play with him for a lot of years.”

Roethlisberger’s 506 yards passing also marks the fourth 450-yard or more game of his career, tying Dan Marino for the most in NFL history.

This is the 15th time that Roethlisberger has won AFC Offensive Player of the Week honors.


You can read more from Ms Varley here.