And once again, we’re putting the spotlight on Regios de Acero who took a lonnnnngggg bus trip from Monterrey, Mexico to Heinz Field last weekend to see their beloved Steelers beat the Baltimore Ravens.

Our friend, Roger Saucedo fills us in on their big weekend:

And here we go again! Regios de Acero were on their way to Pittsburgh last week! This was our trip to celebrate the club’s 15th anniversary. On Thursday morning, December 7th at 7:00 a.m. 90 fans loaded onto 2 buses to see 1 team: the Pittsburgh Steelers. We expected a 40-hour trip but that did not matter, we had an appointment at Heinz field on Sunday night to support Big Ben Roethlisberger and the team vs. Ravens. 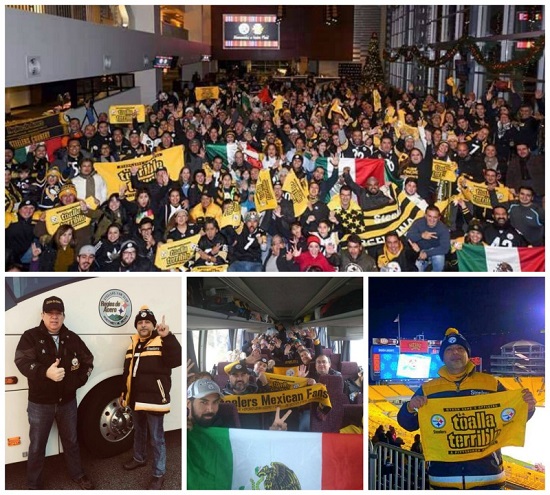 We arrived at the City of Steel on Friday evening, tired but happy.

On Saturday, we toured the city: first the Strip District and then on to Heinz field area for an interview with Mike Clark (anchor news at WTAE). By 5 p.m. we had an important appointment too: an event at the stadium – the Steelers offered a Welcome Party to Mexican and Latin American fans. It was a great party! Roger Saucedo and Jesus Vera, administrators of Regios de Acero, broadcast on facebooklive some moments of the event for his club members in Mexico and all Mexican Steeler Nation too. 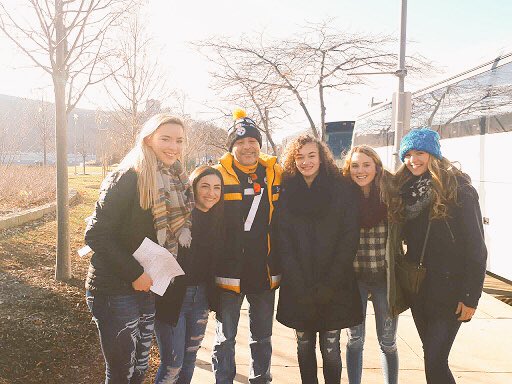 Roger Saucedo @RogerSaucedo Hey @_BigBen7, these ladies outside the @heinzfield ask me for a photo and literally said : we want a picture with someone with Roethlisberger jersey” so, I was lucky! #HereWeGo

And then on Sunday…you could feel the emotion for game day, it was a cold weather, but we were ready to go to Heinz field… and what a game! The Ravens were difficult to beat, but a great pass from Big Ben to Antonio Brown in the final minutes would give the yardage necessary for Boswell to score the field goal of the win! We all screamed and jumped to celebrate not only having won, but also that the victory gave our team the Championship of the North Division! We were all excited and in our hearts we all felt that the victory was dedicated to the great #50, Ryan Shazier! #Shalieve. 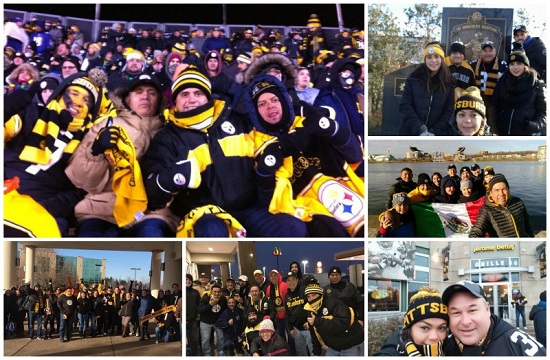 Thanks Killer B’s (Ben, Bell, Brown, Boswell), thanks to all the team and thanks to the city of Pittsburgh because they always make us feel like home. See you next year for another traditional tour of Regios de Acero, the most iconic Steelers fan club in Mexico. Here we go! — Roger Saucedo and the members of Regios De Acero.


Regios de Acero have been making this trip for the last few years: December 2014, December 2015, and November 2016. That is dedication. That is #SteelersMexico!