“We had other guys open. I just have to drive the ball. I have to make the necessary adjustments when the wind picks up, stop floating it and try to drive it through the wind. I never make excuses. When it’s blowing, you have to put a lot of spin on the ball. I just wasn’t doing that. It’s something I can easily change.” — Ben, post-game. 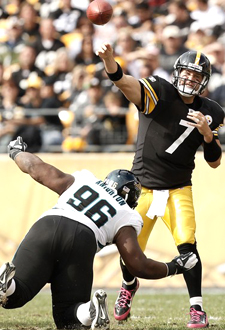 Ben Roethlisberger threw for 181 yards and completed a 28-yard touchdown pass to Mike Wallace in the first half of Sunday’s game against Jacksonville. His quarterback rating was 113.4 after the second quarter and he appeared to be well on his way to another sterling performance, one week after tossing five touchdown passes in a victory against the Titans.

“It was gusting pretty good,” Roethlisberger said of the wind. “Dan [Sepulveda] said on the last punt he wanted to take off and run. He didn’t even want to punt it. It was what it was. It was kind of Heinz Field. One series it blows one way, then it swirls on you. Like I said, no excuses. You have to drive the ball through the wind.”


You can read more from Mr. Fittipaldo’s column here.