“How do you tackle a tree?”

Home/News/“How do you tackle a tree?”
Previous Next

“How do you tackle a tree?”


From the Arizona Republic News: 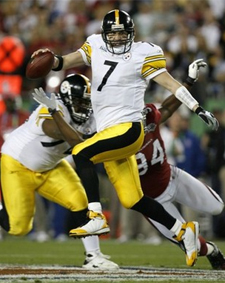 How do you tackle a tree?

That’s what the Cardinals have to figure out on Sunday when they return after a week off and have to face Ben Roethlisberger and the Pittsburgh Steelers.

As difficult as it can be to bring down the 6-foot-5, 241-pound quarterback, it’s not impossible.

“He’s tough to tackle, probably one of the toughest in the game,” Cardinals defensive end Calais Campbell said. “He’s an athlete. He’s like a defensive end playing quarterback. We’ve got to put our bodies on him and hopefully, group-tackle him.”

But Roethlisberger can escape from sacks better than most.

Before the official start of practice each day this week, the Cardinals’ defensive line will practice wrapping up and simulate sacking Roethlisberger by using one of their own as a live practice dummy.

“But you really can’t simulate a guy like Big Ben,” nose tackle Dan Williams said. “He’s such a big, athletic quarterback and the way he can move and make plays is crazy.

“You watch him on film and you see guys hanging on his leg or holding on to his arm and he’s still throwing the ball.”

Check out the new commercial for Head & Shoulders with Troy, Brett Keisel and Hines Ward.

Check out the even funnier “between takes” moments when Hines teaches his teammates some dance moves.


*Thank you to Trish at BrettKeisel.com and Head & Shoulders for Men!

“Bradford’s tough. He’ll be able to rough it out. Ben Roethlisberger goes out there and plays with a broken ankle, broken ribs, broken neck…” — Rams wide receiver Mark Clayton comparing his injured quarterback, Sam Bradford, to another tough quarterback.