“I’m going to take away that I need to play better to win, the defense bailed me out with the interception. They played well. This is a team win and that’s what it’s about. Going on the road against an AFC team and getting a win – no matter how ugly, no matter how pretty it is. You just find a way a win.” — Ben, post-game. 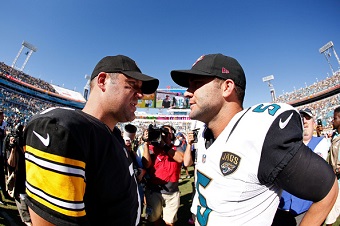 On a day in which their offense struggled against the NFL’s most porous defense, the Steelers got enough of a lift from their own struggling defense to escape Jacksonville with a 17-9 victory over the winless Jaguars today.

The victory improved their record to 3-2 while Jacksonville slipped to 0-5.


“A little disappointed in my play, but o-line played great! I’ve got to play better.” — Ben.

Cornerback Brice McCain intercepted a Blake Bortles pass and returned it 22 yards for a touchdown with 11:32 left to expand the Steelers’ lead from one point to 17-9.

Bortles tried to force a pass to fellow rookie Allen Hurns on the right but McCain had good coverage on the play, picked it off and had no one between him and the end zone.

It was only the third interception of the season for the Steelers but their second of the game. It also came just two plays after a sluggish Steelers offense came up empty again.


“The line played a lot better than what the stats are going to say. That’s a great defense, a good defensive front, and they got after it. I know there are going to be some stats on sacks and stuff like that, but they played a lot better than what it’s going to be written as. A lot of those are on me, the sacks, the fumble – just can’t let it happen. You know, a couple times rather than throw the ball away, I took a sack there at the end because you’d rather [have] the clock keep running ” — Ben.

The Steelers were in position to extend their 10-9 lead early in the fourth quarter with the ball on Jacksonville’s 13. But on third down, defensive tackle Abry Jones sacked Ben Roethlisberger, who fumbled. Andre Branch recovered for Jacksonville at the 17.

The Steelers scored the only touchdown of the first half and led 10-6 at halftime.

Roethlisberger, on third down at the one, faked a handoff to LeGarrette Blount, rolled right and found tight end Michael Palmer for his first touchdown in two seasons with the Steelers.


“I know Jacksonville wanted us to wear the black because it was supposed to be hot, but the Good Lord today was a Steelers fan so he kept it nice and cool for us. We needed this win it was a big one for us.” — Ben.

You can read more from Mr. Bouchette’s column here.

You can watch highlights of Ben’s post-game press conference (at 1:57) here.

And you can see a few game photos here.