Ben on Bettis: “He is the Pittsburgh Steelers”

Home/News/Ben on Bettis: “He is the Pittsburgh Steelers”
Previous Next

Ben on Bettis: “He is the Pittsburgh Steelers”

Teresa Varley, Steelers.com, asked Ben and other former teammates of ‘The Bus’ what made him special, both on and off the field: 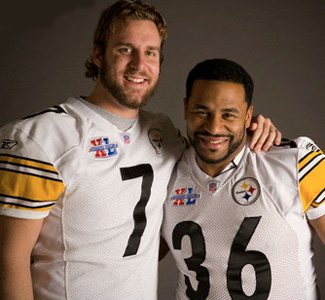 “He is one of the best of all time. His numbers, he has a Super Bowl. What he has done on the football field is easily deserving of Canton. He is the Pittsburgh Steelers.

“He was someone you knew put in the hard work, he wasn’t going to make mistakes, you could count on him. He was a proven guy, a veteran who always went hard.

“It was more than just how special he was as a football player. What he did on the football field spoke for itself. The leadership, the type of player he was. It was the locker room, off the field, the community. When I first got here it was the time the WWJD bracelets, What Would Jesus Do, came out and I would laugh when I was doing things and think, What Would Jerome Do. He is someone I tried to mold myself after. That is what made him so special, outside of the talent he had on the field.”


You can read more from Ms. Varley’s interviews here.


Finalists for the Pro Football Hall of Fame will be selected tomorrow.

Catch Ben’s interview tomorrow (Saturday, February 1st) with Bob Pompeani during his radio show at 93.7 The Fan! You can listen to Bob between 11am and 1pm!