17-year old Steelers fan Jesse Stemen got the surprise of his life when he attended the Hall of Fame Induction Luncheon & Ceremony for his cousin last Saturday:


My second cousin, Denise Stemen, and Ben’s dad Ken were being inducted into the Elida Hall of Fame last Saturday. I actually didn’t realize that Ben’s dad was being inducted, only that my cousin was. When we got to the luncheon, and I saw that Ken Roethlisberger was being inducted too, I was like, “Wow! That’d be so cool if Ben came to this!”

I’ve been a huge Steelers fan since I was born, so is most of my family.

My grandpa, Dave Stemen, and I were standing by the door, and all of a sudden Ben walked in. I was so shocked because I mean, come on, it’s Big Ben!!

Everyone sat down to eat with their own families but all in the same room – and I was still in shock! My family told me to go up and talk to him but I didn’t want to because I figured he gets enough of that and he was there for his dad. 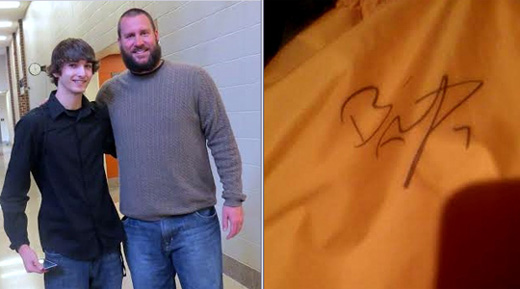 After lunch while we were all talking around our table, I didn’t realize my grandpa had gotten up and left. I heard him calling out to me and I turned and saw that he was talking to Ben. I was nervous! I went over to them and Ben reached out and shook my hand. We took a couple of pictures together and then I asked him, “Hey can I take a snapchat picture of us?” and Ben goes, “Sure! Why not!”

My grandpa, who is the Cleveland Browns fan in the family, was talking and joking around with him. My grandpa told him, “Hate to tell you Ben, but I’m a big Brownie fan!” Ben laughed and told him that was “okay”. My grandpa then said, “But my son (my dad, Bill) and my grandson (me) are HUGE Steelers fans!” Ben told him, “They are good people!”.

After the induction ceremony I had to leave for work, and ended up leaving my bag behind, which had a Steelers logo on it. While I was at work, I got a text from my grandpa that had a photo of him holding up my Steelers bag with Ben’s autograph on it. It was the best.

Overall, just for the few minutes I did talk to him, he was a really nice, funny, joking guy and he made my day! Thanks again Ben! — Jesse Stemen


*Jesse, thank YOU for sharing your story!


You can see photos and a video from Ken Roethlisberger’s HOF Induction here, and read about Ken here.