He’s a guy my career hinges on because he means that much to me…as long as he’s around, I’ll be around.— Ben. 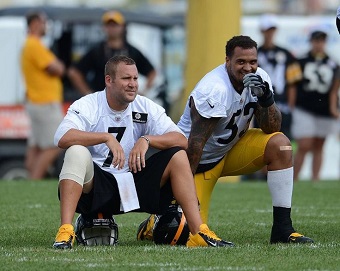 He has one year left on his current deal. He is 36 but still playing at high level and led the NFL in passing yards this season. Quarterbacks are playing into their 40s these days. The Steelers know they need Roethlisberger to win. He said he wants to play “for as long as they’ll have me.”

But there’s a little more to the Roethlisberger story than just signing him to an extension.

“They can come to me tomorrow and say we want to get your deal done. I’ll say, ‘Get Pouncey done first.’ That’s only because I want to make sure he’ll be here.”

Pouncey also will be entering the final year of his contract next season and is due for an extension this upcoming offseason.

“No offense to anyone else, but I don’t want to play with another center,” Roethlisberger said. “I voted for him for MVP. I couldn’t do anything without him.”

The good news is Pouncey has no plans to retire. He just finished his ninth NFL season but still is 29. He was voted second-team All-Pro by The Associated Press, the only Steelers player to be honored.

Pouncey and Roethlisberger have been teammates since Pouncey’s rookie year in 2010. The Steelers current offensive line has been together, for the most part, for four seasons, although it could lose Ramon Foster, who is a free agent and on the wrong side of 30, and Marcus Gilbert, who has started just 13 of the past 32 regular-season games because of suspension and injury. It also could lose line coach Mike Munchak to a head-coaching gig.

“I’ve been spoiled to have that same group,” Roethlisberger said. “I don’t think that happens very often in the NFL. I think I’m the luckiest quarterback in the league. I think they’re the best in the business. They are the engine that drives this team. It’s so much fun to play with them. I pray that we can keep them all together. That whole room is special.”