Home/News/Ben speaks out for teammate Ryan Clark
Previous Next 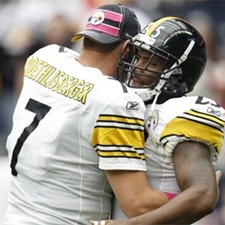 Safety Ryan Clark was fined $40,000 by the NFL for his hit on Ravens tight end Ed Dickson in Sunday night’s loss to Baltimore. This is Clark’s second fine in two weeks after being hit with a $15,000 fine for a late hit against the Patriots, which he understood because it was out of bounds.

This time, though, he feels he did nothing wrong.

Clark’s teammates, including quarterback Ben Roethlisberger, agreed that the hit was legal.

“It’s unfortunate,” said Roethlisberger. “You never want to see one of your guys get hit, especially for that much money. I went back and watched it. If you slow it down and watch it, it’s about as picture-perfect of a tackle you can make. His head was down right across the chest and the back of his helmet maybe grazed the bottom of the receiver’s face mask. Someone needs to stand up and do something like De Smith. He is our player guy, stand up and do something for our players.”

Wide receiver Hines Ward was hit in the game by Ravens linebacker Ray Lewis, a play that wasn’t penalized and knocked Ward out of the game with a stinger. Roethlisberger was asked if the Steelers receivers get the same treatment as their opponents, although it was later learned Lewis was fined $20,000.

“Who hit Hines?” Roethlisberger sarcastically asked. “I don’t know if there was a fine. Was there a fine anywhere else? Who knows? You have to be careful how much you comment on that stuff.”