Ben to start Sunday against the Chargers

Home/News/Ben to start Sunday against the Chargers
Previous Next

Ben to start Sunday against the Chargers

Ben practiced for the second straight day on Thursday, and Coach Mike Tomlin was comfortable enough with what he saw to say he will start this week. 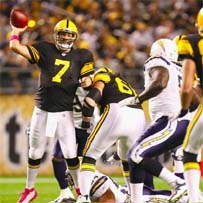 Steelers’ players are excited to have their starting quarterback return to action this week, as Mike Tomlin made it official that Ben Roethlisberger will start on Sunday against the San Diego Chargers at Heinz Field.

“It always intensifies the group and makes us more excited,” said receiver Antonio Brown. “Ben has so much physical talent and ability. I am excited to have him back. It’s definitely important if we want to make a run and have opportunities in the playoff we’re going to need Ben out there with us.”

One of the key factors in getting him on the field was Roethlisberger’s velocity returning, and he said tight end Heath Miller is his barometer for how he is doing.

“I have been around him the longest and he knows I will give him an honest answer,” said Miller. “It’s better than last week as you would expect. Over time he will only get better and better.”

Brown, who returned to practice on Thursday, definitely saw progress in Roethlisberger since last week when he first started to throw the ball.

“His velocity has gotten better from last week,” said Brown. “Last week he had a little harder time drilling the ball where he wanted to get it. This week he is looking good.”

Before he takes the field…

Ben will be suiting up in a custom fitted rib/chest compression shirt, and a layer of Kevlar-lined composite in his shoulder pads to help absorb hits to his clavicle and shoulder joint regions.

The padding, made by Unequal Technologies, has grown popular across the NFL and is similar to what the company puts in chest protectors for baseball catchers.


You can read more about it from the AP’s Will Graves here.

“Good lord, he’s so crafty. He’s such a proven quarterback in this league. The biggest challenge is really trying to get him down. He’s so elusive for a guy his size.” — San Diego Chargers defensive coordinator John Pagano, during an interview today about preparing to play against Ben.