Ben’s ankle: “It’s getting better a little each day – no setbacks”

Home/News/Ben’s ankle: “It’s getting better a little each day – no setbacks”
Previous Next

Ben’s ankle: “It’s getting better a little each day – no setbacks”

Highlights from Ben’s chat with the media today: 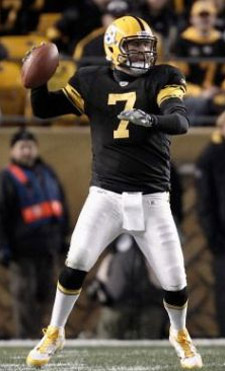 On the possibility of sitting out another game –

“Don’t know if I necessarily need it, but it’d be nice to get an extra week of rest, but I prefer to play.”


On sitting out against the Rams last weekend –

“To just get a rest and not tweak it was good.”


On how long he will play, if he plays, in Sunday’s game against the Browns –

“I don’t know. That’s probably a question for Mike [Tomlin]. We’re going to go out (today) and evaluate how it feels, how I feel, and I’ll let him know.

“If he feels comfortable enough with me being out there then I’ll probably be out there.”


On playing with the high ankle sprain –

“It’s getting better a little each day – no setbacks. We’ll give it a shot today and see how it feels. The pain is always going to be there. I can deal with the pain. I’m not worried about that. I think the biggest thing is not setting myself up to get hurt in other ways or hurt it worse as a sitting duck back there. It’s probably not the smartest thing in the world to do, but if it’s just the pain I’ll deal with that.”


On the biggest issue of playing with the injury –

“Weight-bearing up on my toes. That obviously involves running and throwing. That’s the biggest thing, to strengthen it up on my toes.”


Ben did practice fully today, which was the first time he has done so since playing the 49ers on December 19th.


You can read more on his practice from Ed Bouchette at the Pittsburgh Post-Gazette.

Playoff Stat of the Day:

Dan Marino, Bernie Kosar, Jim Everett, Todd Marinovich, Shaun King, Ben Roethlisberger, Joe Flacco, Matt Ryan and Mark Sanchez are the only rookie quarterbacks since the NFL-AFL merger to take their teams to the playoffs. Their combined playoff record is 6-9, with a total of 15 touchdown passes and 23 interceptions and an average of 16 points a game. None of the rookies reached the Super Bowl, though four (King, Roethlisberger, Flacco and Sanchez) got their teams as far as the conference championship game. The other five rookie signal-callers all lost in the opening round. — NFL.com

“When you play against Ben, you can get home and not knock him down and he’ll make a play. Charlie doesn’t have those physical traits, but they both execute the offense well.” — Cleveland Browns head coach Pat Shurmer, during his chat with the media.


“There are three quality starting quarterbacks in the AFC North, and the Browns don’t have any of them. Pittsburgh’s Ben Roethlisberger is the class of the division, and when healthy, is one of the top 5 or 6 QB’s in the league.” — Bob Frantz, The Morning Journal (Northern Ohio), from his column on the Pro Bowl selections.