with a ‘stop by’ to say hello to Brett Keisel at his Annual Pheasant Hunt: 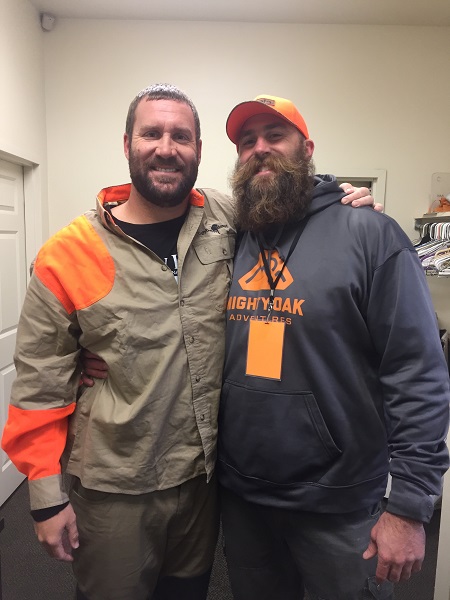 And another episode of his radio show:

“I thought he had a good practice yesterday and I’m sure he’s excited for the second half of the season.” When asked if he was operating with the starters right now, Ben said “Yes, he was yesterday.”

Looking at his role in the offense after Juju Smith-Schuster’s breakout game against the Lions, Ben said there won’t be a whole lot of change in where Martavis lines up, but could you see Juju take some of his snaps outside of the slot in Martavis’ normal role.

“I think Martavis’ spot is where it always has been, it’s outside…I think Juju comes in and plays the slot and I think there are certain packages where we’ll have Eli [Rogers] in the slot and Juju outside.”

Talking more about the offense, Ben shared with us what they need to do better in their second half of the season.

“6-2 is really all that matters. I know we haven’t played up to our potential…We want to score as many points as we can. We need to be more successful in the red zone. We’re down there a lot, we’ve got to score, we possess the ball, we’ve got to find ways to finish with seven in the red zone instead of three.”

It seems that no matter how well things are going for this team, there always seems to be a focus on the New England Patriots, the team that seems to always stand between the Steelers and the Super Bowl and Ben was asked about whether or not they follow with the Patriots are doing and keep a close eye on them.

“They’re the champs, right? They’re the best in the world. They won it last year and when you do that and you have the title and you have your name on the Lombardi, you should be talked about, you should be looked at. They’ve earned that and they deserve it. You obviously pay attention to what other people in the AFC are doing, other teams in your division are doing, things like that, so ya, you know what’s going on…but the nice thing is, we have to worry about us. We’ll worry about New England when we play New England, we’ll let the other teams that have to play them until we play them, worry about them.”

Speaking of the defending Super Bowl champs, Ben talked about what his teams’ goals are for this season and the approach he takes to getting into the postseason.


*Thank you so much to Trish at BrettKeisel.com for the photo!