Ben announced the fourth grant of the 2011 season from The Ben Roethlisberger Foundation at The Giving Back Fund today. 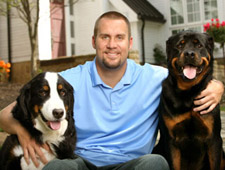 The foundation will be distributing a grant to the Avondale Police Department, in Avondale, AZ, just outside of Phoenix where the Steelers will play the Cardinals on Sunday, October 23rd.

“The Avondale Police Department is proud to receive the Ben Roethlisberger Foundation Grant”, said Avondale Police Chief Kevin Kotsur. “It was not without our partnership with the Boys and Girls club of Metropolitan Phoenix and the Tri-City West/Thornwood Branch whose sponsorship made this grant possible.

“The grant was made specifically to the Avondale Police Department’s K-9 unit who will be using the monies granted for much needed equipment, ballistic vest made for K-9’s and in service training for the handlers and service dogs as well,” the Chief continued. “We can’t thank the Ben Roethlisberger Foundation enough for their consideration of our team.”

NFL Stat of the Day: