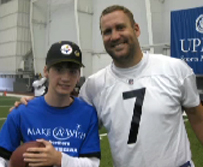 Trenton Lockhart is a 15-year-old who loves football, his family and the Pittsburgh Steelers. But unlike many other teenagers, Trenton has a form of autism that prevents him from grabbing and throwing objects like a football.


You can watch video of Mr. Donnelly’s report here.

From Ben’s Wednesday meeting with the media –

Ben Roethlisberger has been doing some serious campaigning these days, getting in the ear of offensive coordinator Bruce Arians with his plea to run the no-huddle offense.

“I feel we can change it up,” said Roethlisberger. “It’s a weapon for us. We just haven’t had a chance to get into it yet. I wanted to get into it last week. I love doing it. We have so many weapons we need to utilize it.”

Roethlisberger doesn’t think using it on the road is a problem and would welcome it this week against the Arizona Cardinals or at any week for that matter.

“I would like to do it every game regardless of how we are doing,” said Roethlisberger. “Traditionally we have gotten into it when we have struggled on offense. I went to (Arians) the last game at the eight minute mark after we went a couple of three and outs to try to change up the tempo and the pace. We usually go to it when things aren’t clicking on offense.”


You can read at Steelers.com!

Ben was a guest on Jim Rome is Burning on ESPN2 at 4:30 this afternoon. Some of the highlights of his interview:

Jim Rome: Who and what are the Pittsburgh Steelers?

Ben: “We’re starting to get an identity. I guess on offense if we’re going to have some good quarters, some bad quarters, I guess it’s good that we’re 4-2 because hopefully when we do find out who we are as a team we can play a little better.”


Jim Rome: Why do you think the offense has been so up and down?

Ben: “Well, I think we’ve dealt with our share of injuries early on, we’ve rotated and plugged guys in and out, we’ve got some young guys still…we’re still just trying to get to know each other and learn each other, we’ve got a ways to go, but I think we’ve made some good strides so far.”


Jim Rome: Have you ever thought about changing your style (of play)?

Ben: “No. You know, I’ve heard some people say you need to change, you’re getting older, you’re taking a beating, but I think defensive coordinators would want me to change my style. I think the way I play the game gives them fits sometimes and as I said earlier this year, I’m not playing for year fifteen and sixteen. I’m playing for this year and this game. If it’s my last one, then so be it. For me it’s about giving my all every game and playing every game as if it’s my last.”


Jim Rome: Do you ever wonder why the referees do or don’t do for you (as in not getting as many calls as other quarterbacks)?

Ben: “I’ve probably thought about it behind closed doors, but it is what it is. I’m not going to complain about it. I’m not going to throw my hands up when I get hit, or if I get a call or don’t get a call. The first time they’ll throw a flag when a guy’s just holding onto me, and I know that I can break the tackle. For me, it’s not worth complaining. I just go out and play the game.”


Jim Rome: Why do some quarterbacks get more calls than others (bringing up Michael Vick’s comments several weeks ago)?

Ben: “I think, in part, because the league doesn’t want certain games to be played without certain quarterbacks. Who’s going to watch, and this is no offense to any of the other Patriots, but who’s going to watch the Patriots without Tom Brady? And the Saints without Drew Brees? That’s just the way it is. They want to protect those guys because they’re the marquee guys in the league. They don’t want them to get hurt. Ratings…and people want to watch those guys play.”


Jim Rome: How do you feel about being named a captain of the team this year?

Ben: “Anytime you’re a captain for the Pittsburgh Steelers it means a lot! The rich tradition and the history here, and the great players that have been captains before me. It’s an awesome honor.”


You can check Mr. Rome’s website later for a podcast of the interview.