“Bettis and Ben back together again”

Home/News/“Bettis and Ben back together again”
Previous Next

“Bettis and Ben back together again”

Ben was honored by Jerome Bettis on Friday night –

“It is great to see him involved in his charity and doing great things in the community. The one thing I wanted to instill in all of those guys when I was there was it was about the community. They do so much for us that it was important and imperative that we do things and give back to the community.” — Jerome

“To me Jerome is a hero, a guy I tried to idolize on the football field, in the community. To be honored by him means a lot to me. It means a lot to me to be so involved in the community. Doing the grants for the dogs, giving over a million dollars to police, fire, search and rescue is something that is important to me. And the Make-a-Wish visits every game are so special. Then we get the letters talking about the wishes we provide through grants and it means a lot and is special in your heart.” — Ben

As he was thanking his teammates during his Pro Football Hall of Fame speech, Jerome Bettis called out Steelers quarterback Ben Roethlisberger.

“Brother, without you saving that tackle, I still might be on the doorsteps, brother,” said Bettis, referring to a touchdown saving tackle Roethlisberger made after Bettis fumbled against the Indianapolis Colts in the playoffs during the Super Bowl XL season. “I owe you for life.”

Bettis honored his former quarterback by presenting Roethlisberger with the 2015 Humanitarian of the Year Award at the Caring for Kids Dinner benefitting Bettis’ “Bus Stops Here” Foundation at the Fairmont Pittsburgh.

“It’s great to honor a person I have seen grow up,” said Bettis. “I have seen the guy go from rookie to seasoned veteran, but I have also seen him go from a young, young man, to a husband and father. 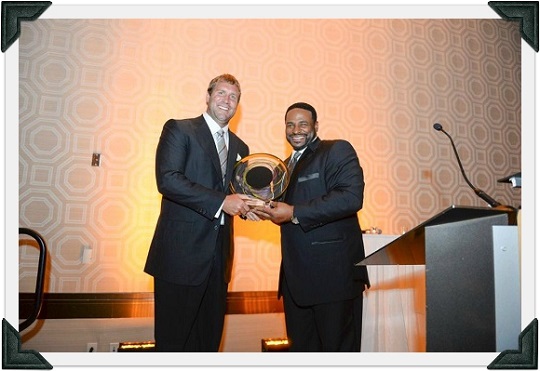 “This is really special to get a chance to honor Ben. Not to mention that he did help me on a play or two so to be able to honor Ben is a huge honor for me as well.”

Roethlisberger started his own foundation, the Ben Roethlisberger Foundation, in 2007. Since then it has provided grants for law enforcement agencies or fire departments in the Pittsburgh area, as well as in the cities where the Steelers play, to be used for the K9 units, bomb sniffing dogs or rescue dogs. Roethlisberger also works closely with the Make-A-Wish Foundation, not only by spending time with wish recipients, but also providing funding that helps make the wishes possible. 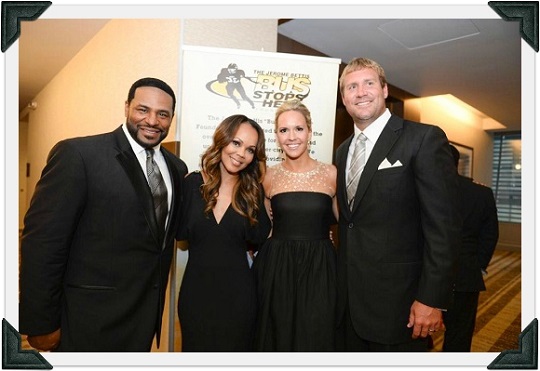 You can see more photos from the evening here and here.


*Once again, thank you to Ms. Varley!