“None of what the 49ers accomplished statistically during the game mattered, because in every instance Ben Roethlisberger either had an answer to negate what had just happened, or even better, he had authored something earlier that ultimately rendered what the 49ers would end up doing as nothing but statistical fluff.

“The Steelers’ 43-18 victory today at Heinz Field, Roethlisberger completed 21-of-27 (77.8 percent) for 369 yards, with three touchdowns and no interceptions for a rating of 155.8. He was magnificent in the no-huddle. He got to the running game at the right times. He spread the ball around to five different receivers, and his three touchdown passes went to three different receivers. He was 2-for-2 on two-point conversion passes. He was a critical factor in the Steelers converting 60 percent on third downs, in the offense being a perfect 5-for-5 in the red zone, and in the team building a 29-3 halftime lead. And just to make sure, on each of the Steelers’ two fourth-quarter possessions that followed 49ers touchdowns, Roethlisberger drove the Steelers to answering touchdowns that maintained the margin of their comfortable lead.

“Ben Roethlisberger is the Steelers Digest Player of the Week.” — Bob Labriola, Steelers.com. 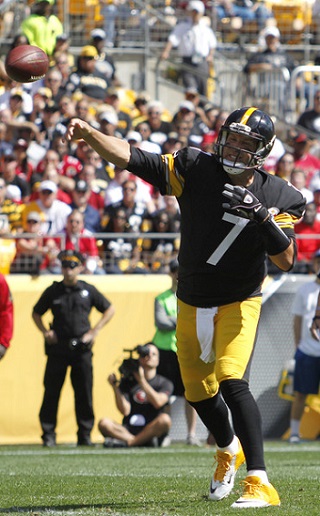 Is this what you expect the offense to look like?

I hope so. Things clicked today. We did some really good things, threw the ball, ran the ball and scored in the red zone. Mostly disappointed about coming out in the second half and we had two screens that we felt could have been big plays, but weren’t. We had to punt and then we had the ball backed up.

To me, it’s frustrating because when we have a punt, we would rather just keep going and give our defense a break. We want to possess the ball and work the ball down the field. I was calling almost every single play and we were moving so fast and that’s credit to our guys and the conditioning. We didn’t possess the ball very long tonight, but we put up the points.


How difficult are you guys to defend for defenses now that you’ve got Le’Veon Bell back; just another weapon?

It’s great. I think DeAngelo has done an awesome job. I don’t think that it means that he will stop being on the field. It is always good when you get guys back. We’ll get 26 back this week and 10 a couple weeks after that.


How did you feel about the way that you spread the offense around? Everybody seemed to be involved.

That’s my favorite part about it. You include everybody. I wish that everybody could get touchdowns. I wish that everybody could catch for 100 yards, which is hard to do, but you try to include everybody. It’s not necessarily something I’m always trying to do, but you’re calling plays because you see guys and see things and guys have to be ready when their numbers are called. And that’s why I’m proud because everyone was ready when their number was called.


It seems like you used the run to be strategic almost to set up the pass.

Most definitely. They were giving us a lot of different looks, bringing their safeties down and we were throwing balls and we thought, let’s not overthink ourselves. Let’s just call a play and live with it. Call a safe play, you’ve got different options and just live with it. Make them adjust to us. We do that a couple times a game Where we thought we were getting them off balance, but we just got to the line as quick as we could. To me, that’s the balance that we need to have. 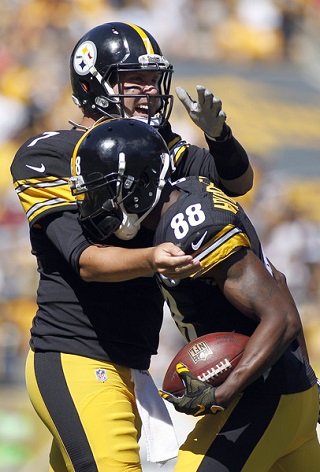 How much confidence do you have with Heyward-Bay right now?

Tons. I’m not shying away from that play where he scored a touchdown. We were on the sideline. We were talking, myself, Coach Haley, Bruce and Mike, and Landry, all of us just talking about what play we want. And Coach Haley suggested a play and I said that I liked it, but there was something else.

I feel like there is another play that we have and we started talking and I told him let’s run the play that we ran. Knowing that it was probably going to be Heyward-Bay down the middle of the field, I guess my long answer to you is that I never would have thought of that play if I didn’t have confidence in him, that he would make that play. So we split the safeties and ran and he made that catch. It wasn’t an easy catch.

We got down there and it was just as much of us changing the plays. Give Coach Haley the credit. We got down there, he was saying huddle up and calling plays and he trusts the preparation that we put in and the communication that we have. He just let us keep going. Today, we kept it spread out and ran the ball.


Re: Good chemistry between you and Antonio Brown:

He’s awesome. I don’t know what else to say. He works his butt off. His off the field work, the practice work, the film room, everything he does just shows up every single week. This week was even more impressive. He’s taking more steps to be even better. This was probably his best week of practice he has had in any year.

I’m not going to tell you any trade secrets on that play. He’s one of many options. Going back to the previous question, when you hurry up and spread them out, you can have multiple options. That was just one of the options, so you don’t have to worry about checking and making a bunch of adjustments.


Re: Hurry up and spread offense:

Any of the up-tempo stuff we were doing, you can see defenses, not just today, but that’s one of the reasons the line really likes no huddle. Usually defensive line guys are dragging and start huffing and puffing, the offensive line loves it because they are just going and going. Just as much as it is in the field when you are down there and it’s time to huddle, you substitute people in. We just want to line up and keep going.


Easier at home than opposed to on the road?

It’s easier of course because you communicate. Still, you should be able to do it on the road.


You can read more & see video of the game highlights here.